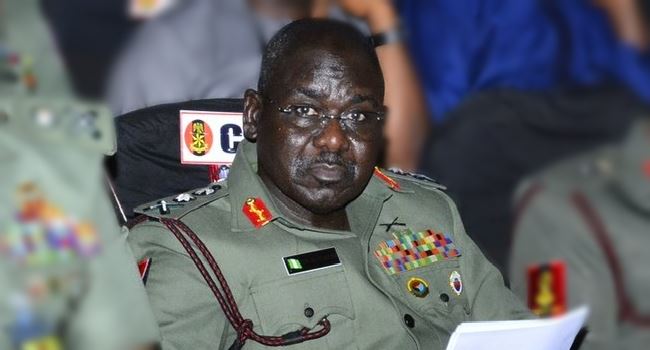 The Chief of Army Staff, Lt. Gen. Tukur Buratai, on Tuesday revealed what according to him is the ‘truth’ on why the Nigerian Army continues to have setbacks in the fight to flush out the terrorist sect Boko Haram in Nigeria’s North East.

He made the revelation when he spoke at the opening of a five-day leadership workshop for mid-level officers and soldiers in Abuja.

He said, “It is unfortunate, but the truth is that almost every setback the Nigerian Army has had in our operations in recent times can be traced to insufficient willingness to perform assigned tasks or simply insufficient commitment to a common national and military course by those at the frontlines.

“Many of those on whom the responsibility for physical actions against the adversary squarely falls are yet to fully take ownership of our common national or service cause. And this is the reason why I have always ensured that the promotion of army personnel is essentially based on professional considerations only.

The Army Chief went further to say that an effect of modernisation, globalisation and Information and Communications Technology (ICT) in the last decades had been the decline in nationalistic enthusiasm.

“Hence the theme of the workshop has been aptly chosen as ‘Lead, follow or get out of the way,’” he added.

The revelation by Buratai is coming as Boko Haram terrorists, especially its faction, Islamic State West African Province (ISWAP), have in recent times constantly attacked Nigerian Army bases in the North East, allegedly killing many soldiers during such attacks.

Despite these, the government had also insisted that the terrorist group had been ‘technically’ deflected.