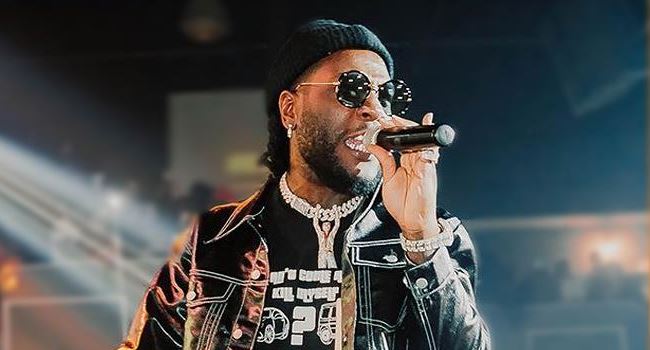 Afrobeat artiste, Burna Boy has sent his fans and critics alike on Twitter on an overdrive after his decision to refund a hundred dollar ticket to a fan who was not dancing to his song during a concert in the USA.

In a viral video of the incident which happened on Tuesday during the Atlanta stop of his ‘African Giant’ tour, Burna Boy who noticed the fan was not swaying to his song decided to halt his performance to call him out.

The controversial singer went ahead to refund the hundred dollar ticket price to the fan and also asked a bouncer to escort the fan out of the venue saying, “Your face is not encouraging.”

The action by Burna Boy has thus far elicited mixed reactions on Twitter with critics reprimanding his move, while his fans applauded his decision to send away the fan in question as seen below.

@Lekipollo: ”And if Otedola or E-money did not dance at his show. He will give them their money back and call the security to take them out? Trash!”

@Chukwufunayam: “It’s okay to humiliate a human being because it’s Burna Boy? That’s poor showmanship but what do I know.”

@Zaddy_nomso: “Not necessary though, some people might not want to dance as they don’t know how to.

“But they paid and want to see him Perform. Not everyone will dance at your show, you just ignore and focus on the good energy from others.”

@Kolatoye: “This is funny really. I feel, as a performer, people pay to watch you perform. People don’t pay to come and encourage or give you any kind of energy.

@“If you are lucky and blessed to have fans that light up your fire and fan your flame beautiful otherwise focus on your performance.”

@Dhlamini: “I’d be so embarrassed if I was the guy but at the same time, how can you not dance to Burna boy’s music?”

@Aluchinago: “So is must that everyone must like his song, was he the only artist performing there? It’s not right biko”.

Gov Ayade wins as Tribunal throws out all APC complaints