Home » Latest » Cabal within the presidency plotting to remove Osinbajo before 2023, group alleges 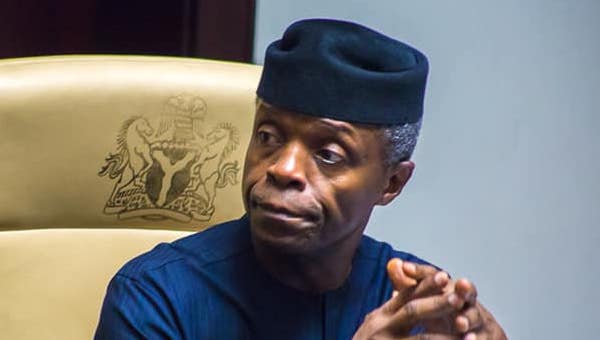 It has been alleged that some political actors within the presidency have devised a fresh ploy to damage the person of the Vice President, Yemi Osinbajo.

A political group, the Initiative to Save Democracy (ISD) claims that a certain cabal within the presidency have developed a calculated plot, in collusion with some South West leaders, to peddle outright falsehood, fake news and lies against the vice president.

In a press statement issued signed by its Secretary, Peter Oladele, ISD said it had reliable information that the cabal would stop at nothing to distract the vice president from doing his work, and oust him before the 2023 elections.

According to ISD, the cabals were working tirelessly to malign the vice president’s reputation and integrity as they could not find any evidence of wrongdoing against him.

“The first thing they attempted to do was to destroy the relationship between the President and Vice President but that has not worked despite deploying different strategies from inside and outside.

“Then they tried to malign the Vice President’s reputation by throwing up all sorts of trump charges against him but with no evidence of wrongdoing that soon crumbled.”

“They even referred to the N5.8 billion NEMA Emergency Intervention, the N90 billion FIRS Campaign Fund and other fake news but all those failed too because they were fake news from the beginning. They even went after those who have backed the Vice President,” the statement said.

ISD then explained that the cabal was cooking more fake news and lies against the VP and this time in conjunction with South West leaders.

“In the coming days and week, there will be fake news and lies about the Vice President in the media and social media space yet again, most of it fabricated by the cabal and some people who claim to be South West leaders led by a former governor of Lagos who is afraid of VP’S rising profile.

“Their plan is to oust him in time before 2023 elections which is still very far away.

“The plan of the cabal is to ensure that they distract the Vice President every week with some fake news. What this will ultimately mean is that instead of him to focus on the work he is doing for Nigeria, he will be concerned about the fake news and lies”.

The group said that the cabal was very angry at the president for showing off the cordial relationship he enjoyed with the Vice President during the Independence Day celebration on 1 October.

According to the group, “Their renewed anger at the Vice President stemmed from the showing he enjoyed with his boss during the Independence Day celebration. The cabal said the two of them appeared to still enjoy a very healthy relationship as they were seen talking and laughing as something the President had said at different times.

“They will stop at nothing to make Prof. Osinbajo look bad in the eyes of President Muhammadu Buhari, his boss. They also don’t like the fact that he has restated his loyalty to serve Nigeria and serve his boss, these are some of the things getting them angry.”