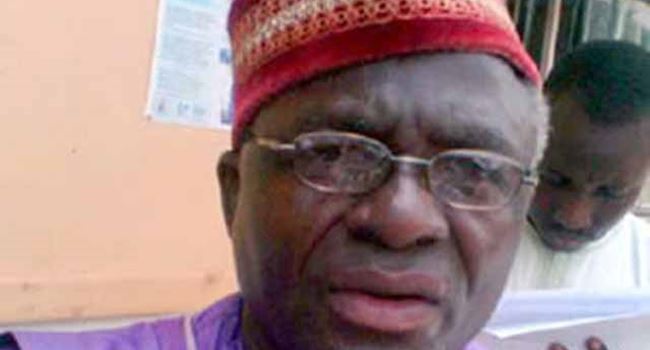 A retired Major General, Zamani Lekwot on Sunday responded to the call by the Supreme Council of Sharia in Nigeria that his execution would restore peace and end killings in Southern Kaduna.

He said he was not afraid to die, and wondered why people were preaching death and hate, instead of peace, which the country needs.

In 1992, under General Ibrahim Babangida military regime, Lekwot, Major James Atomic Kude (retd) and others were sentenced to death for their involvement in the Zango-Kataf riots, which claimed many lives.

The Muslim scholars argued that a revisit to the death sentence handed down on Lekwot and others found complicit in the bloody riot, would end the crisis in Southern Kaduna.

Responding to them during an interview with newsmen on Sunday in Southern Kaduna, Lekwot, a former governor of old Rivers State, said he was not afraid of death, adding that his life like everybody’s life “is in the hand of God, not the detractors.”

Lekwot, who spoke after the interdenominational service and indoor protest organised by the state chapter of the Christian Association of Nigerian (CAN) said:

“What Nigeria needs at this moment is genuine tolerance regardless of ethnic or religious affinities and not hatred.

“I have nothing to say. My life like everybody’s life is in the hand of God, not the detractors. The detractors and evil forces that are preaching hate, trying to throw spanner in the works, will fail. May God expose them in all ramifications.”

On whether he is afraid of death he said, “afraid! I am a trained professional soldier and a trained commander.”

Speaking further he said, “What the country needs is peace. We need all Nigerians to live together in peace and unity.

“All genuine religious leaders are supposed to preach peace and love. Why are there people preaching hate and division?

“The Zango-Kataf they are talking about. Yes. The killings were unfortunate but the dispute was the relocation of the market. Some people didn’t want it. At the end of the day, Commission of Inquiry was set up; recommendations were made and the Mua’azu Committee’s recommendations had been implemented

“Those that are reverting to it are clever by half. What we need in our country is genuine tolerance and love and peace. We have lived together for a very long time.

“Now, by what they are saying, they are now telling the reason some armed foreign bandits are imported to destroy the country.

“How does that (revisiting his case) address the issue (of killings in Southern Kaduna). So, what is happening in Kaduna and by extension to other parts of the country are bad omen to our unity and stability.”

He also commented on the remarks by Commander of the Operation Safe Haven that Southern Kaduna killings were being masterminded by criminal elements from both side of the divide.

According to Lekwot, military commanders as professionals were supposed to be neutral at all settings.

He said, “This would earn them the confidence of the people. That was a very unfortunate statement from a military commander.

“As professionals, security people are supposed to be neutral in every setting so as to inculcate the confidence of everybody. In other words, when that happens, the cooperation of all sides will emerge.

“But in this setting the military people need intelligence. Credible intelligence which they will use for the operation. What he said was the utterance of the government which boils down to describing what happened.”

Also responding to the White Paper committee set up by Governor Nasir El-Rufai to revisit the Zango-Kataf riot, the former military governor said:

“Government at this point ought to preoccupy itself on how to proffer solutions to the killings in Southern Kaduna.