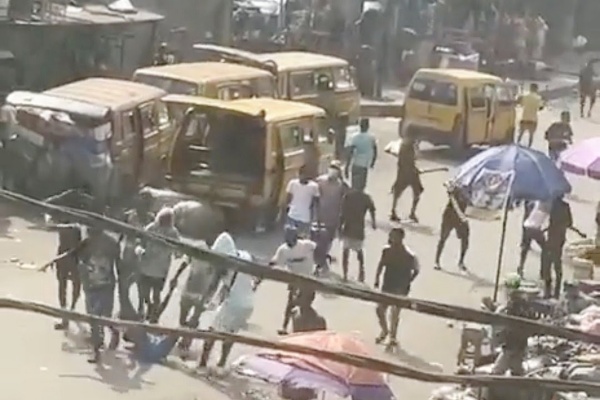 Calm and normalcy has returned to the Idumota area of Lagos Island following a deadly clash between rival factions of the National Union of Road Transport Workers (NURTW) which left two people dead and several others sustaining serious injuries.

The clash which was said to have started on Thursday night and spilled over to Friday, affected the commercial nerve centres of the area like Balogun, Kosoko, Tom Jones, Martins and Oluwole, bringing trading activities to an abrupt end as traders and shop owners hurriedly closed up and fled the areas.

The rival gangs were said to have shot sporadically in different directions as they displayed assorted arms and ammunition including guns, machetes and charms, and in the process, left many injured.

The popular Idumota market was deserted as traders ran for their lives for fear of getting caught up in the fracas as the street urchins tried to show their supremacy.

While reacting to the clash, the Lagos State government had released a statement appealing to the leadership of the NURTW to end their violence and stop the bloody fights.

The appeal which was contained in a statement by the Special Adviser to Governor Babajide Sanwo-Olu on Central Business Districts, Gbenga Oyerinde, urged the warring factions to embrace peace.

Oyerinde who attributed the violence to the infiltration of the area by street gangs and hoodlums from other parts of the state under the guise of membership of NURTW, noted that the government was doing everything within its power to restore the peace of the area.

The situation was later brought under control after the Lagos State Police Command drafted a team of the Rapid Response Squad (RRS) to the area to restore calm.

A statement posted on the Twitter handle of the RRS on Friday confirmed that peace had returned to the affected areas.

“Idunmota, Tom Jones, Martins, Oluwole and other parts of Lagos Island are calm and peaceful,” the statement reads.

“Commuters, traders and transporters are moving on with their normal businesses.

“Policemen from various units and divisions are on ground to prevent breakdown of law and order.”

A Senior Special Assistant on New Media to Gov. Sanwo-Olu, Jubril Gawat, also confirmed that calm had returned to the area after the RRS team was deployed to “ensure law and order.”

“SITUATION REPORT for Idumota Lagos Island: The @rrslagos767, @Taskforce112 and Area A Police Command are fully on ground to ensure peace in the area; Idumota, Tom Jones, Martins, Oluwole and others are calm this morning, everyone is going about their lawful duties.

“Not all shops are fully opened but security agencies on ground have assured market men and women to open their shops, they have also mounted specific positions to forestall any form of violence or hoodlums taking advantage of the situation,” Gawat tweeted.

Related Topics:hoodlumsLagos Island
Up Next