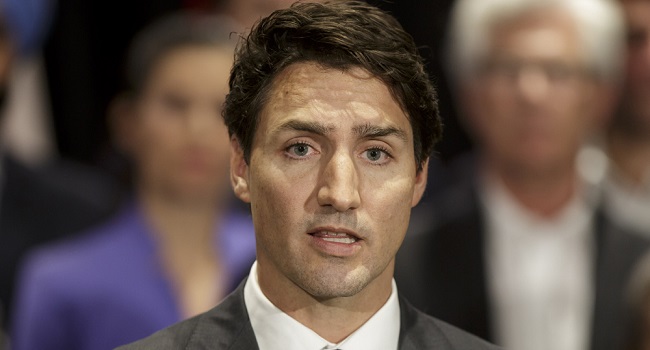 Canada has issued a stern warning to China against its “coercive diplomacy,” repressive measures in Hong Kong and detentions of Uighur Muslims which it said are counterproductive for itself and the rest of the world.

Canadian Prime Minister Justin Trudeau took aim at China in a statement on Tuesday as he marked the 50th anniversary of Canada’s long diplomatic ties with Beijing.

“We will remain absolutely committed to working with our allies to ensure that China’s approach of coercive diplomacy, its arbitrary detention of two Canadian citizens alongside other citizens of other countries around the world is not viewed as a successful tactic by them,” Trudeau said at a press conference.

He also mentioned Canada’s “concern for the protection of human rights and places like Hong Kong and … with the Uighurs.”

Trudeau said that Canada would “continue to work with our fellow like-minded nations around the world, to impress upon China that its approach to internal affairs and global affairs is not on a particularly productive path for itself or for all of us.”

Meanwhile, Chinese Foreign Minister Wang Yi has accused the United States of “stirring up confrontation” in the Asia Pacific, declaring as a “security risk” Washington’s plan to form an Indo-Pacific alliance, seen as a strategy to counter Beijing’s own growing assertiveness in the region.

Wang issued the statement on Tuesday, following his meeting with his Malaysian counterpart, Hishammuddin Hussein, during which he also highlighted China’s leadership in fighting the coronavirus pandemic, and urged the Associated of Southeast Asian Nations (ASEAN) to work together to prevent “external disruptions.”

Related Topics:canadaChinaHong Kong
Up Next