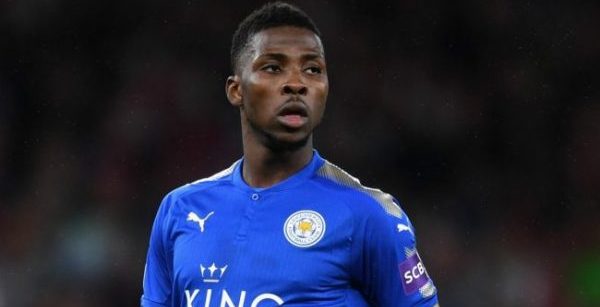 Super Eagles forward, Kelechi Iheanacho scored for Leicester City in their 3-1 victory over Burton to advance to the quarterfinals of the Carabao Cup on Tuesday night.

His compatriot, Wilfred Ndidi was brought in two minutes to time as the Foxes went on to seal the victory with an 89th-minute by James Maddison.

Iheanacho’s seventh-minute opener alongside Youri Tieleman’s 20th-minute effort had put Brendan Rodgers side in control before Liam Boyce scored with a 20-yard drive to halve the deficit for the hosts.

At Goodison Park, Nigeria forward, Alex Iwobi was in action as second-half goals from Richarlison and Mason Holgate fired Everton past Watford to the last-eight.

At the Etihad Stadium, holders Manchester City saw off Southampton 3-1 to advance, thanks to a goal from Nicolas Otamendi and two from Sergio Aguero as Jack Stephens scored for Saints.

In the other games played concurrently, Oxford United scaled through at the expense of Sunderland after winning 4-2 on penalties following a 1-1 draw in regulation time; while Colchester won 3-1 against Crawley.