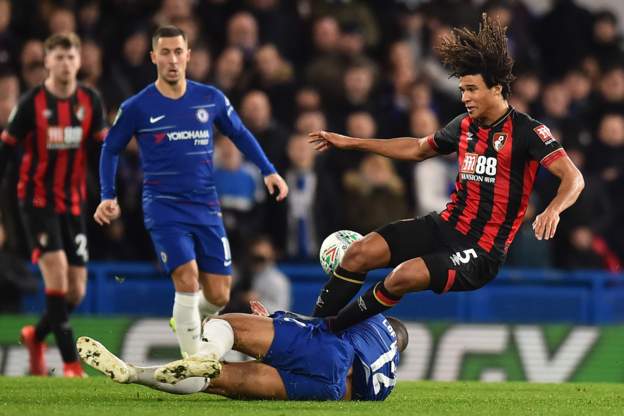 Super Eagles, Alex Iwobi was in action for Arsenal who crashed out of the Carabao Cup after falling to a defeat against Tottenham.

The 0-2 loss at the Emirates Stadiun is Arsenal’s second defeat this week, after their unbeaten run was ended by Southampton on Sunday.

Thanks to goals by Heung-Min Son and Dele Alli, Spurs are into the last four with the victory.

At Stamford Bridge, a late goal by Eden Hazard secured Chelsea a semi-final ticket in the competition.

Read Also: Solskjaer takes over from Mourinho as caretaker manager at Man Utd

The Blues were playing goalless with Bournemouth until the 84th minute, and the game could have gotten to penalty shootouts but for Hazard strike.

The semifinal draw took place after the ties, and Tottenham were drawn to face Chelsea.

Manchester City, who defeated Leicester City on penalties on Tuesday, will take on Burton, who saw off Middlesbrough, in the other semofinal clash.

The ties to be played over two legs in the weeks commencing 7 and 21 January.

Man City and Tottenham will be at home in their first legs.