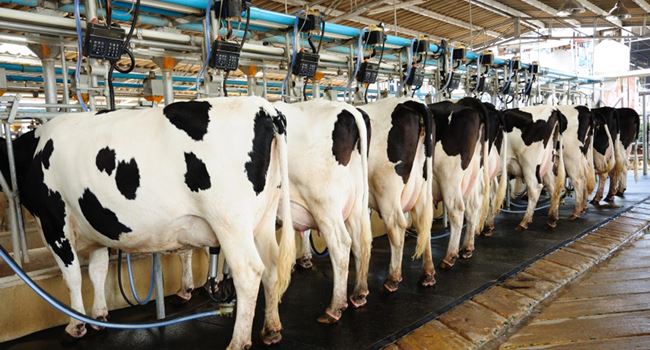 The Central Bank of Nigeria (CBN) on Monday took the campaign for indigenous milk production sufficiency further by seeking the intervention of the Federal Capital Development Administration (FCDA) and other firms in setting up milk-processing facilities in the Federal Capital Territory (FCT).

Seven days ago, the apex bank had formally granted six milk-producing companies the liberty to import milk into Nigeria on the grounds of the commitment they had made so far to expand the local manufacturing capacity of milk and other dairy products.

During a visit to the Federal Capital Territory Minister, Muhammad Bello, the apex bank governor, Godwin Emefiele mentioned that the CBN was seeking collaborations in areas including land allocation and credit guarantee to farmers’ cooperative societies.

Mr Emefiele, who was accompanied by officials of Friesland Campina WAMCO, Z Integrated Farms and Nestle and L, enjoined the FCT Minister to apportion land to the companies in order to set the establishment of the milk-processing plants in motion.

The CBN chief observed that allotting sites for milk processing in the FCT would facilitate government’s backward integration policy in the milk production value chain at the same time at the same to resolve the acute supply crisis the industry is currently facing.

“It is CBN’s desire to make states self-sustaining and economically viable entities by supporting projects and programmes that will help create jobs and grow the economy,” Emefiele stated.

He declared that the CBN aimed to increase milk manufacturing output to 550,000 metric tonnes in the next one year.

Nigeria’s milk production capacity hovers around 500,000 metric tonnes per year, leaving a yawning gap between it and the country’s annual consumption figure of 1.3 billion tonnes.

Similarly, the country’s import bill for the product stands between $1.2 billion and $1.5 billion every year

According to Mr Emefiele, the leadership of the CBN craves to expedite the accessibility of funding to investors, drive economic expansion, stimulate job creation and conserve job creation through the initiative.

He mentioned that the synergy between the CBN and private sector stakeholders through the Anchor Borrowers’ Programme (ABP) and the Commercial Agricultural Credit Scheme (CACS) had begun to produce the desired results.

The CBN governor remarked that companies in the private sector were beginning to leverage the backward integration policy while also promoting local industrialisation and generating employment.

He reiterated the commitment of the Niger State government to the partnership, which began with its allotment of 31,000 hectares of land to milk companies in the Bobi Grazing Reserve for nurturing dairy cattle for milk extraction.