The Monetary Policy Committee (MPC) of the Central Bank of Nigeria (CBN) on Tuesday retained the key lending rate at record-high of 14 percent for the 12th consecutive time to monitor the magnitude of the liquidity impact of the fiscal injection and election related expenditure.

The tight monetary policy stance has continued to ease inflation pressures, dropping for the 17th consecutive month in June to 11.23 percent from 11.61 percent recorded in May. 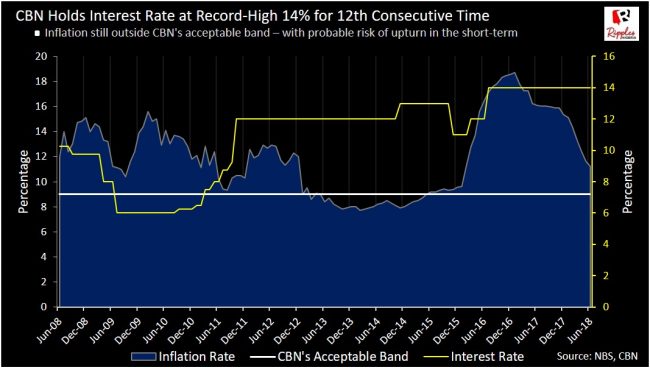 ​The ​CBN Governor, Godwin Emefiele, announced the decision of the committee at the end of a two-day ​meeting in Abuja​.

He said seven out of the ten members of the committee that attended the meeting agreed to maintain the monetary policy stance, adding that two members voted to increase the Monetary Policy Rate (MPR) by 50 basis points, while the other one member voted to raise the MPR by 25 basis points.

​Emefiele said the committee also left the A​symmetric ​C​orridor unchanged ​at +200 and -500 basis points around the interest rate​; Cash Reserve Ratio at 22.5 percent; and Liquidity Ratio at 30 percent.

The MPC had increased the interest rate, which determines the rate at which banks give out loans, by 200 basis points to a record-high of 14 percent in July, 2016, to curtail upward inflationary trend and salvage Nigeria’s recessed economy.

This is the third policy rate decision by the committee this year and the second after it admitted five new members upon the approval of the National Assembly.