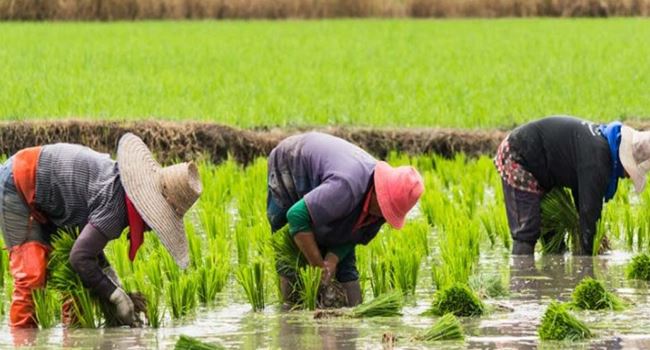 The Central Bank of Nigeria (CBN) will henceforth bear the loss burden of farmers in its Anchor Borrowers Programme by 50%, as food crisis escalates in Nigeria, spurred by the worst dry season in five years, Yusuf Yila, its development finance unit head said on Tuesday.

Mr Yila told farmers and stakeholders in Abuja, that the policy shift and urgency to share risks with farmers resulted from the bank’s resolve to bolster food sufficiency in the country.

Deluges of rain are aggravating the plight of farmers, particularly in northern Nigeria, a region not known for heavy rains, where rice plantations were recently submerged below floods, causing farmers to count loss.

Yila said the CBN would set its gaze primarily on rice, maize and tomato production during the dry season this year, noting the apex bank’s commitment to yield improvement of the crops. He revealed the bank was willing to finance wheat production also.

Read also: Banks’ credit to the economy expands by N3.77tn in 15 months – CBN

Food scarcity in Africa’s biggest country by population, where more than 200 million people live, has been helped by government’s protectionist policies in agriculture, which sometimes could be sometimes hasty, impelling it to shut its land borders to food imports last August.

President Muhammadu Buhari added fertiliser and all food products to the mix this month when he directed the apex bank to call off sales of the foreign exchange used for importing them.

Nigerian inflation rate hit its highest point in 28 months at 13.22% in August after rising without cease for 12 months, the statistics office said in its consumer price index report last week. A separate index, which measures movements in food prices, observed food inflation rose to 16% last month. It had stood at 15.48% in July.