CCB to charge Magu for non-declaration of accounts | Ripples Nigeria 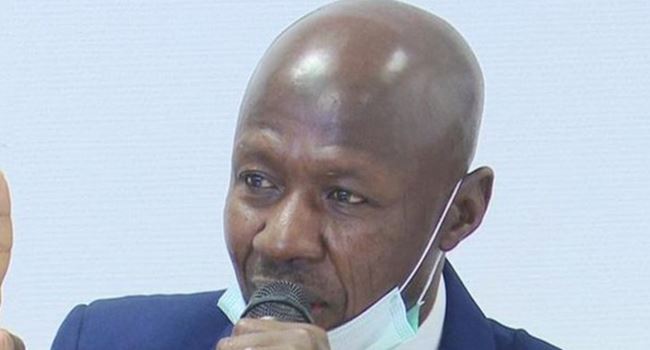 The Code of Conduct Bureau (CCB) has concluded arrangements to charge the suspended Chairman of the Economic and Financial Crimes Commission (EFCC), Ibrahim Magu, at the Code of Conduct Tribunal (CCT) over an alleged failure to declare some accounts in his asset declaration forms.

A source at the CCB told journalists on Sunday that the Bureau took the decision following the suspended EFCC chief’s failure to honour the invitation extended to him by the Bureau to defend himself on the allegation.

The agency had in a letter with reference number CCB/HQ/II&M/007/2093 and dated November 2, 2020, asked the anti-graft czar to appear at its Abuja office on November 17.

The CCB also directed Magu to come along with copies of all his asset declaration forms since he joined the public service, payslips and land documents.

But the suspended EFCC chairman failed to honour the invitation and sent a letter explaining why he would not appear before the CCB.

He said all the necessary documents were in his office at the EFCC headquarters and he had been denied access to the office due to his suspension.

The source who spoke on the condition of anonymity, said:

“There are some accounts which we discovered that Magu did not declare. In this age of BVN, there are things that you cannot hide. Also, the CCB has copies of his asset declaration forms which have been matched with the discovered accounts.

“It is obvious that Magu did not declare them but rather than explaining himself in person, he is making excuses. Magu will be arrested if he fails to show up and he will be charged. That is a done deal.”