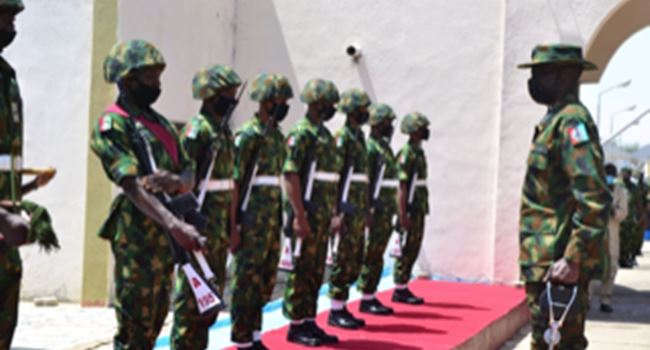 The Chief of Defence Staff (CDS), General Lucky Irabor, on Wednesday, March 10, mandated the troops to be more aggressive in dealing with unrepentant terrorists in the North-west.

This order by Irabor was contained in a statement issued via the Director, Defence Information, Brig. Gen. Onyema Nwachukwu.

Ripples Nigeria gathered that Irabor issued the directive when he led the service chiefs and other military chiefs on a visit to Operation Hadarin Daji in Zamfara State.

The order came just as troops eliminated 25 terrorists in a fierce encounter in the North-east following an earlier battle order issued by the Chief of Army Staff, Lt. Gen. Ibrahim Attahiru.

“He charged troops to be ruthless and more aggressive in decisively routing out unrepentant bandits and other criminals within the North-west zone, comprising Zamfara, Katsina, Sokoto and Kebbi States,” the statement said.

The statement also stated that the purpose of the visit was to assess the ongoing military operation in the state and to appraise the combat and operational readiness of troops in the area.

Irabor pledged the support of the service chiefs to enhancing the fighting capabilities and efficiency of the troops.

He also assured them of improved welfare and prompt resolution of administrative challenges bedevilling the operation.

Also, in his address, Irabor commended the officers and men of Force Headquarters (OPHD), Gusau for their concerted efforts and urged them not to relent in giving their best to ensure the return of lasting peace to Zamfara State in particular, and the North-west zone in general.

The CDS and service chiefs thereafter paid a courtesy visit to the Governor of Zamfara State, Mr. Bello Mattawale, at the Government House, Gusau.

While receiving the CDS, the governor made a case for the provision of more modern war hardware for the security agencies in the state.

This, he said, would help contain the insecurity confronting not only Zamfara State but the country.

The governor enjoined the military to clear all the bandits’ camps in the state, stressing that this will help in eliminating them.