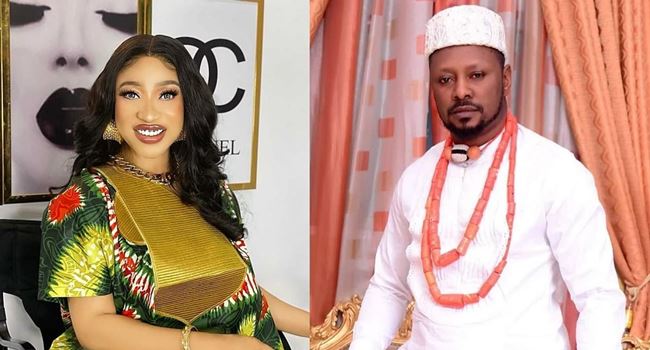 Controversial Nollywood actress, Tonto Dikeh has flaunted her new lover before the world via her social media platform, Instagram.

The actress broke the news of her relationship on her Instagram handle on Sunday, June 27 on the occasion of his birthday.

Read the enthralling words the actress had to say below.

Here is Kpokpogri’s response to the post on Instagram.
“Happy birthday to him sweetheart. Long life and prosperity and many more years in return.”

Tonto Dikeh was previously married to businessman, Olakunle Churchill; their marriage ended in a bitter divorce in 2016.

Toke Makinwa still believes in love, she wants to remarry

Nigeria media personality, Toke Makinwa has revealed in a social media question and answer session that she is still open to finding the love of her life and walking down the aisle, again.

Makinwa filed for divorce from her estranged husband, Maje Ayida in 2016 barely two years into their marriage. Their marriage was officially dissolved in 2017 at the Igbosere High Court in Lagos.

Makinwa revealed she wants to remarry; as she does not want her kids to go through her ordeal while growing up.

She said on her Instagram stories, “I definitely want to get married again. Losing both my parents at 8 hurt so much.”

“I’ll like my kids to have what I never had.

The Nigerian recording artiste who won his third consecutive BET Award earlier in the week turned 30 on Friday, July 2.

The 28-year-old central midfielder came along with a special Pogba-customized Jersey for the self-acclaimed African Giant.

Here is a video of Burna Boy’s birthday ceremony.

The music executive died of a suspected heart failure at the age of 44.

Several days after Obama’s demise, a video surfaced online, where Davido was seen urging the deceased to quit smoking, however, Obama refused to yield.

The winner of the 2020 BBNaija reality TV show delivered an ephemeral but fascinating performance of his hit song, ‘All over me’, from his latest album, Shall We Begin.

The song was featured on the Academy’s platform, ‘Press Play At Home’ to promote fast-rising artistes across the globe.

Since news of their union, the couple have put their respective Instagram accounts on private.

It would be recalled that a couple of months ago, Fatima Zara specifically slammed Nigerian wedding vendors on social media.

The Bauchi state first daughter said vendors are unprofessional, rude, and charge their clients too much for services.

She also slammed vendors who charge and treat their clients based on their parent’s status and name.

“Vendors are rude, especially wedding vendors, and no it doesn’t apply to all, not at all.

“Some are very pleasant and their presence is refreshing…newsflash.
“The wedding and creative industry is growing.
Rapidly in Nigeria.
“You keep being rude and sooner or later your client profile will drop.
“Fix that attitude.
“ Everyone is replaceit… veryable, myself included.
“Also, stop telling people how much you charged other clients, no one asked for it…very unprofessional. ”

“Their fathers’ title isn’t them and they aren’t their parents. Look beyond that and be professional. Don’t charge people based on their parent’s name, their wealth, etc.”

Nigerian lady tattoos face of NURTW leader, MC Oluomo, on her back