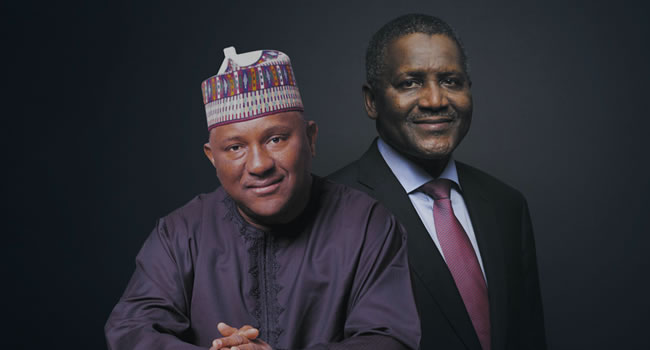 The wedding ceremony of Comedian and social media content creator, Woli Arole, and his wife, Yemi, took place in Lagos on Saturday, April 10.

The wedding was attended by his family and friends. Also, notable celebrities from the Nigerian movie industry were at the event.

Woli Arole is one of the most popular social media content creators, he has garnered 2 million followers on the photo sharing app, Instagram, becoming one of the most followed skit makers in Nigeria.

The battle for supremacy has erupted among major sugar producers in Nigeria with Dangote Group and Flour Mills seeking the withdrawal of the operation licence of BUA Sugar refinery in Port Harcourt, Rivers State.

Dangote, the Chairman of Dangote Sugar Refinery Plc, submitted a petition to the Minister of Industry, Trade and Investment, Niyi Adebayo, against BUA International Limited, owned by Alhaji Abdul Samad Rabiu, with respect to the establishment of a sugar plant by BUA in the Port Harcourt Free Trade Zone.

Dangote is not alone. He has a co-petitioner in the person of Mr. John Coumantaros, Chairman of Flour Mills Nigeria Plc.

Prince Harry and his wife, Meghan Markle are expected to return to the United Kingdom following the demise of Prince Philip.

The grandfather of Prince Harry and Prince William, who was married to the 94-year-old queen for 74 years, passed away on Friday at age 99.

He and the Queen were parents to Charles (Harry’s father), Prince of Wales, Anne, Princess Royal, Prince Andrew, Duke of York, and Prince Edward, Earl of Wessex.
Prince Harry and Markle released a statement following the passing of Prince Philip.

“Thank you for your service … You will be greatly missed. In loving memory of His Royal Highness The Duke of Edinburgh 1921-2021,” the couple wrote on the website for their nonprofit, Archewell Foundation.

Chimamanda addresses difference between a feminist and being ‘nasty’

She admonished women who identify as feminist to desist from their nastiness and wickedness. She stated that most young ladies hide their cruelty under the flag of feminism.

“I often say to young Nigerian feminists, please do not use feminism to justify your wickedness.
“So you have some of these young women and I’m talking to them and they sound really mean and I say, you know what, this isn’t feminism, you’re just really nasty.”

Nollywood actress, Ivie Okujaye has spoken about colourism and favouritism in the Nigerian movie industry.

According to the Nollywood actress, most movie producers and directors prefer light-complexioned individuals to darker-skinned ones.

She mentioned that it is ideal for cinematographers to choose actors, especially women based on talents and capabilities, and not physical appearance.

“Sometimes these filters tend to make us look lighter. But nah, on ground I’m blackkkkk. So pls know this before calling me up for a job and then saying “oh, you’re much darker than I thought”. Nagode,” Okujaye tweeted.

Davido, in a viral video on social media, was seen holding not less than five bundles of 1000 Naira notes. The ‘Fall’ crooner danced while Ayefele was performing one of his songs.

Boakye noted that no one knows what the future holds; therefore, single ladies who get pregnant out of wedlock should skip the idea of abortion instead of regretting it later on.

“Abortion is not good ooo! Don’t wait till your bank account is filled up before giving birth, please you never know what the future has for you“, she wrote via her Instagram page.

Related Topics:#featuredAyefele’BUADangotedavidoWoli Arole
Up Next