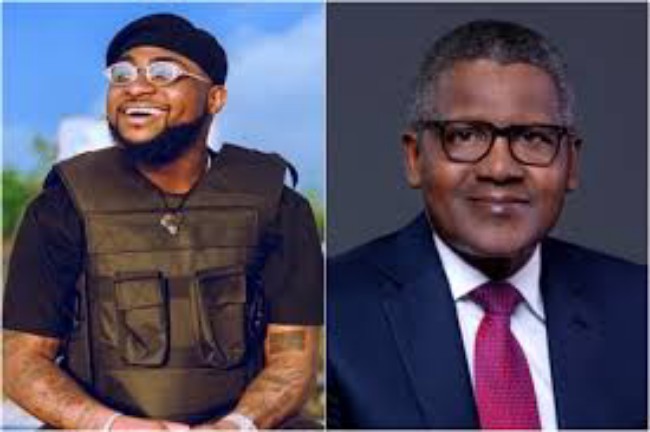 Nollywood couple walk down the aisle

The union of the Nigerian celebrities came as a surprise as both parties had denied speculations that they were in a relationship.

While the renowned actor Lateef maintained that he was only a friend of Adebimpe; for the Nollywood actress, she specifically reiterated in numerous interviews that the talented Nollywood thespian was ‘not her type of man’.

The couple have finally walked down the aisle before their colleagues in the entertainment industry.

Here is a photo of the couple.

Both socialites, who are very familiar, had engaged in an exchange of pleasantries before parting ways.

In the trending video of the incident which is making the rounds on social media; Dangote who was in the company of an unidentified man, could be seen engaging Davido in a conversation.

Both men were captured in a portion of the tarmac at the expansive private jet facility in Ikeja, Lagos.

18-year-old Shatu Garko emerged as the winner of the 2021 Miss Nigeria beauty pageantry that was held in Lagos State on Friday, December 17.

Shatu made history as she became the first-ever Hijab-wearing contestant to be crowned Miss Nigeria after defeating eighteen others.

Garko succeeded Etsanyi Tukura, a Taraba State native who had won the 2019 contest. Because of COVID-19, there was no contest last year.

Here is a video of where Garko was announced the 44th winner of Miss Nigeria.

On Friday, December 17, Nollywood actress, Doris Ogala, a friend and colleague of Tonto Dikeh weighed into the confrontation between her buddy and Instagram dancer, Jane Mena on social media.

In a series of Instagram posts, the actress fumed and blamed Tonto Dikeh for initially begging her to withhold some sensitive information about the Instagram dancer and her husband for the sake of their marriage.

Doris Ogala has since urged Jane Mena to get ready as she would be ‘throwing the table down from the tenth floor’.

Former Big Brother star, Uriel Oputa via her Instagram reflected on how she had dreams and aspirations of becoming the ‘next Tiwa Savage’.

In a lengthy Instagram post shared on Thursday, the reality tv star stated that she moved to Nigeria so as to chase her music career like Tiwa Savage, however, things did not go as planned.

Uriel described an occasion in which she was invited to play at an event and was so terrified that she forgot to put on the microphone while singing.

Someone came to tell her to put on the microphone, but she forgot the lyrics and ended up singing ‘Amazing Grace.’

The reality star stated that it was in this moment that she decided to give up on her music career.

Popular on-air personality Tolu Oniru aka Toolz has vowed never to engage in an altercation with celebrities like Tonto Dikeh, Jim Iyke and Frank Edoho.

The media personality made this known in an Instagram post on Friday, while asking her fans to choose some of the celebrities they are scared of having altercations with.

Reacting to her question, Toolz wrote:

“Mine has to be Jim Iyke, Tonto or Frank Edoho. They like to bring nuclear bombs to fistfights.”

Tonto Dikeh, Jim Iyke and Frank Edoho are some of the celebrities who are popular for engaging with critics either physically or virtually.

It is no news, Tonto, is considered one of the most controversial celebrities in Nigeria.

Tonto is currently in a messy fight with Bobrisky and Janemena.

It would be recalled that in August 2021, Nollywood ‘bad boy’ Jim Iyke made headlines after assaulting his colleague Uche Maduagwu who questioned his source of wealth and alleged that he was wanted by the Economic and Financial Crimes Commission (EFCC).

Meanwhile, Frank Edoho is renowned for his witty remarks and sarcasm. His replies to critics are considered one of the best.

He is always fond of pointing out the grammatical errors of critics who try to berate him.

Award-winning disc jockey, DJ Humility explained the pompous attitude of most celebrities after becoming famous versus when they were still trying to break into the spotlight.

Speaking during a session monitored by Celeb Gist, DJ Humility real name Benedict Afagwu stated that it’s demeaning when his calls to some musicians are forwarded to their management.

He went on to say that the ill-attitude is why budding musicians have a hard time getting aid from people like himself.

Listen to DJ Humility speak about icons Banky W and D’Banj below.

A post shared by The Tattle Room 🇳🇬 🌎 (@thetattleroomng)

Author Chimamanda Adichie snubbed by international magazine for being too glamorous

Renowned author Chimamanda Adichie in an Instagram post narrated how an international magazine rejected her photos for being too glamorous.

While sharing the glamorous photos that was rejected on her verified Instagram page, she wrote:

“It was a cover shoot for an international magazine. Or it was supposed to be. The magazine rejected the photos.

”They didn’t want me ‘looking too glamorous,’ they said. And so the cover didn’t happen. What does one do with rejected photos but show them anyway, primarily for the vanity-boosting benefits of such an act; but also to celebrate and thank these talented people in Lagos.”

Actress Princess Shyngle explains how she will test a cheating husband