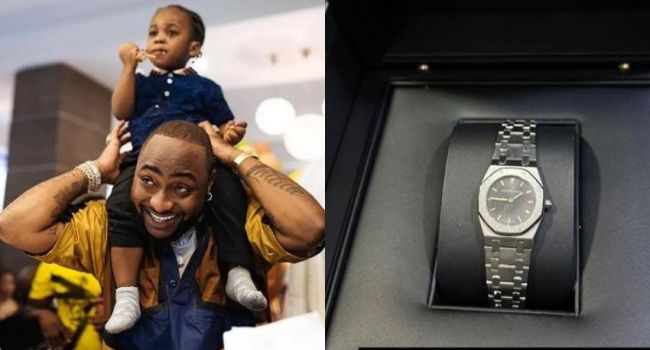 On Friday, June 17, the award winning musician took to his Instagram stories to share a video of the new wristwatch.

He also claimed that his son is now the youngest boy to own an Audemars Piguet luxury watch.

Below is a video of Davido picking up the wristwatch.

Nigerian entertainer and billionaire heiress, DJ Cuppy, on Wednesday, June 15 unveiled the methodology she has applied so she could complete her thesis.

The disc jockey whose real name is Florence Otedola published a photo of notes written on her back urging people to desist from talking to her as she looks to finish her thesis.

The singer, who is studying for a Masters Degree in Oxford University, is in the process of writing her thesis.

To ensure that she’s not distracted, Cuppy who insinuated that she is sanguine with her note pleaded with others to allow her focus.

The note on her back reads;

“Please, do not talk to me.

I have no self-control and will talk to you for two hours and will not get my thesis done.”

Nigerian musician Cynthia Morgan has shared on her Instagram stories that s3x is primarily for reproduction and every other thing doesn’t matter.

Taking to her Instagram stories on Thursday, June 16, the ‘German Juice’ singer stated that she had just recently found out that s3x is mainly for reproduction.

According to the singer, people can only enjoy s3x when they are married.

Here is what she wrote:

“Just sincerely finding out sex is mainly for reproduction.
Other than that it is a waste of time.
In other words, you can only really enjoy sex when you are married.”

America-based Nigerian model, Faith Morey has referenced those who are supporting political candidates for selfish reasons ahead of the coming 2023 general elections.

In a video shared on her Instagram story, the model stated that ‘Nigeria will happen’ to those expecting monetary value and supporting politicians for selfish reasons.

Morey further added that corrupt leaders and moneygrubbing citizens should know that karma awaits them because they are jeopardizing the future of the country and that of their children.

Morey also added that in 2022, most people live below $100 in Nigeria, there’s no steady light, good roads and good hospitals in the country.

Listen to her speak below.

Nollywood actress, Kiitan Bukola has admonished women to be submissive to their male partners.

In a lengthy thread published on her Instagram platform, the Yoruba movie actress warned of the repercussion in the future for women who do not respect their male partners.

According to the actress, she stated that by 50, most women would have lost attraction, meanwhile, men of the same age are still capable of attracting a younger woman.

She said that women who didn’t submit to their partners in their youth will be punished for it at that time when the men can “conveniently marry a sweet 16/18.”

Read her lengthy thread below.

Nigerian actor, Yul Edochie has stated that there is need for Nigerians to be very cautious of their advocacy online and offline to avoid inciting tribal war, primarily because the major flag bearers are from the three major ethnic groups in Nigeria.

Specifically, the three major candidates for the coming elections, include, Peter Obi of Labour Party who is Igbo, Atiku Abubakar of People’s Democratic Party (PDP) is Hausa, while Bola Ahmed Tinubu of the All Progressive Congress (APC) is Yoruba.

Admonishing Nigerians to be cautious going forward, he wrote on Instagram;

“At this point, we need all need to be careful with our utterances.
As the three major flag bearers are Igbo, Yoruba and Hausa.
Let’s not turn the campaign into tribal war.
Cos some Kain talk don dey build up small small.
People are free to support whosoever they believe in.
If you don’t like any other person’s choice, free am.
Your choice must not be other people’s choice.
Let’s be guided.
Election is not war.
Yul Edochie.”

The nuptial ceremony was well attended by his colleagues from the entertainment industry.

Some notable names who were the ceremony include, Pete Edochie, Wilfred Ndidi, Akah Nnani, Racheal Okonkwo, Stan Nze, and many other a-list Nigerian stars.

The comedian proposed to his partner on the 1st of June 2022.

Check out photos and videos from the ceremony below.

Lady recounts how Burna Boy, friends started fight at Cubana night club, shot people after she turned him down