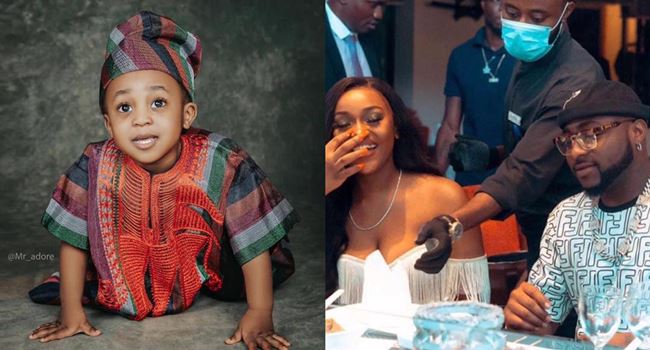 This is the first time the couple would be seen together since allegations of Davido cheating on the chef emerged. The state of Davido and Chioma’s relationship has remained nebulous for several months.

The birthday party was attended by DMW crew, family and friends.

Watch Davido and Chioma celebrate below.

Samklef slams celebrities who use #EndSARS to promote their brand

According to the beatmaker, it is not ideal for celebrities to only use the hashtag for ‘promotional games’. He admonished celebrities to be sincere and wage war against politicians instead of being volte-face about justice.

It would be recalled that the #EndSARS memorial event took place on Wednesday, October 20. Here is what Samklef had to say:

“But Lagos State government does show and some of your celebrities go to the show now.
Activists by day, government padi by night. Celebrities should stop using this end SARS for their own promotional game. How many of them visited the family that died?”

Veteran Nigerian rapper and activist, Eedris Abdulkareem, has reacted to claims made by the Attorney General of the Federation, Abubakar Malami, that Yoruba nation agitator, Sunday Adeyemo otherwise known as Sunday Ighoho, has a link with a convicted Boko Haram sponsor.

Malami made this allegation during a press conference in Abuja on Friday, October 22.

Reacting to the development via his Instagram page on Saturday afternoon, Eedris stated that IPOB leader Nnamdi Kanu, former presidential aspirant and activist Omoyele Sowore, and Sunday Igboho have all been linked to terrorism, however, Islamic cleric Sheik Gumi who has repeatedly made a case for an amnesty to be granted to bandits, hasn’t been linked to terrorism.

Charly Boy’s queer daughter, Dewy Oputa explains how she’ll have a baby with her lover

Dewy Oputa, the lesbian daughter of veteran Nigerian musician and activist, Charly Boy has revealed that she is prepared to raise a child with her lover.

Dewy stated during a question and answer session on her Instagram Live that she will adopt a child because she cannot go through the excesses of childbearing.

Here is what Dewy stated;

“We do plan on having kids, we were considering adopting or fostering but I’m indifferent about birthing a child.”

“When asked if she is married, Dewy said she has met her partner’s family and is waiting for her partner to propose.

“I am not yet married but I have met my partner’s family and she has met mine. The only thing left now is the ring and when I get it I will let you guys know”

In an Instagram post shared on Saturday, October 23, Moyo Lawal stated that sleeping alone is something she isn’t willing to do anymore.

“Last last, single mother thing because doing the right thing has no reward.”

Tiwa Savage spoke for the first time on Friday, October 22 after her controversial tape leaked on social media.

Recall Tiwa Savage made headlines for heinous reasons earlier in the week.

Following the release, the singer received serious criticism and bashing from Nigerians online.

“Change that sh*t to the game and never speak on it again,” she wrote.

The singer narrated his recent experience with the Nigerian police force on his social media platform, Instagram.

According to the singer, he went to the club for the first time after two years and saw traffic barricades everywhere in Lagos Island at 2 to 3 am.

Here is what he narrated below.