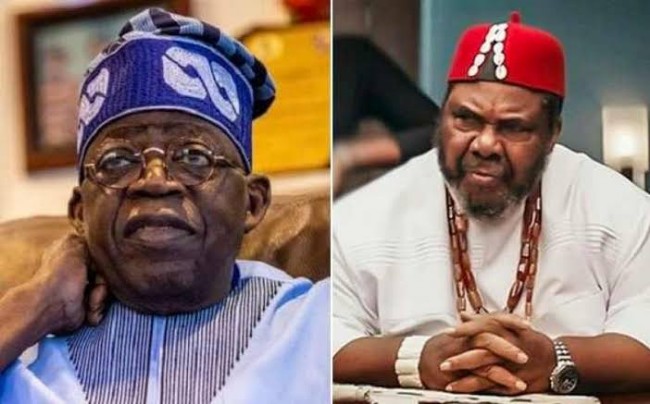 Speaking with BBC Igbo, Edochie said the former Lagos State governor has been in power for a long time and should consider resigning.

The veteran thespian also decried the marginalisation of Southeasterners politically and their inability to produce a president since the country returned to democracy.

He said the Asiwaju of Lagos should leave power so that the youths who are healthier and are capable of moving the nation forward.

Listen to him speak.

Nollywood actress, Elvina Ibru during a session with media personality Chude Jideonwo recounted how she was molested by armed robbers during a visit to her boyfriend’s house a couple of years ago.

Speaking, Elvina who is the daughter of the late Delta State businessman, Michael Ibru mentioned that the incident scarred her for several years.

She mentioned that this is the first time she will be narrating the story without holding back.

“I was r*ped in my boyfriend’s house, it wasn’t in my house.

You see, that’s the problem I have, people don’t put down what you said. It wasn’t in my own house.”

“Due to my tight schedules, I couldn’t visit him then.

Then one day, he just called and said, I don’t blame you, it’s because I’m a princess and his house is too humble for me.

So, I just had to visit him. Unfortunately, that was the day armed robbers came to the apartment and I was r*ped.”

The 49-year-old also enjoined people who have been s3xually assaulted before not to be ashamed to share their stories.

“If you have been raped before — either as a man or woman — it’s not your fault. And you should never be ashamed to talk about it,” she added.

Nollywood actress Rahama Sadau on her Twitter platform recounted how she was rescued from the Abuja-Kaduna train attack on Monday, March 28.

It was earlier reported that terrorists on Monday night attacked a Kaduna-Abuja train after bombing the rail which led to the death of eight persons with an unspecified number of passengers abducted.

The actress in a post on her Twitter account revealed that she was scheduled to be on the train with her sister, however, they missed it.

Sadau, however, said she had friends who boarded the train and were victims of the attack.

Myself and my sister were to be on the attacked train last night but we missed it. WE MISSED IT!! 😭 it could’ve been me & mine but it’s actually Us… We had friends & family in that train😭. WHEN IS THIS EVER GONNA STOP??? #KadunaTrainAttack

Big Brother Naija Shine Ya Eyes third runner-up, Angel Smith has addressed allegations levelled against her by her former employees.

Specifically, the reality star was called out on Saturday, April 2 for refusing to pay her former social media handlers. Also, it was alleged that Angel isn’t as wealthy as she claims to be on social media despite her Fame and popularity.

The reality star has since addressed the outburst on social media.

Taking to her Instagram stories, Angel noted that her house is upside down, and she is in a difficult situation.

“Archies, sorry I’ve been awol, my house is upside down so my life is in different boxes rn until they ‘re done but I love and appreciate you guys for all you have been doing so far”

Nigerian reality star Kiddwaya revealed why most Nigerian-born celebrities do not support their colleagues born with a silver spoon.

According to the former Big Brother Naija candidate, most Nigerian celebrities are envious of those who are from a wealthy home.

Kiddwaya mentioned this on his Twitter platform on Saturday, April 2 after Nigerian celebrities, especially the creatives in the music industry failed to acknowledge singer Davido’s recent achievement.

The musician featured on the official song for 2022 FIFA World cup, becoming the first ever Nigerian to attain the feat. However, no Nigerian celebrity congratulated or acknowledged the self-acclaimed Omo Baba Olowo.

In a since deleted tweet, Kiddwaya stated that those who are hating on Davido are the ones with the problem.

“You hate us because we were born rich. Sounds like a mother f**king YOU problem”.

“First Nigerian Artist to be on the FIFA soundtrack and my people hate it? The validation is not needed any more. That’s the beauty of being global”.

RMD said this following an attack on the Abuja-Kaduna train and destruction of properties at MKO Abiola stadium after the Nigeria-Ghana World Cup qualifiers clash.

According to him, Nigerians are broken, angry, and have seen it all, which can be a trigger for destruction if not handled properly.

RMD warned that things may worsen if the government does not apprehend perpetrators and do more than promises to protect Nigerians.