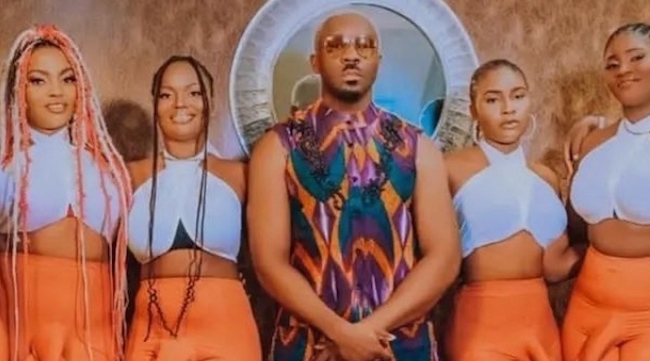 Nigerian nightlife aficionado Pretty Mike on Saturday explained why he decided to drop the jaw of guests at the funeral ceremony of the mother of the foremost music executive, Don Jazzy.
The socialite attended the funeral ceremony of Don Jazzy’s mother with eight women who wore controversial costumes.
Specifically, Pretty Mike is infamous for making headlines with bizarre gimmicks whenever he attends an occasion. He was called out by netizens and several of his celebrity colleagues for ‘always chasing clouts’.
Taking to Instagram, Pretty Mike gave reasons for deciding to choose this particular gimmick.
His post reads;
“The world is changing, in my opinion u shouldn’t be favored because of what’s in between ur Legs, Everyone should be given equal opportunity, because we all are capable in different fields regardless of gender”

A post shared by Pretty Mike Of Lagos (@prettymikeoflagos)

Nigeria recording artiste, Augustine Miles Kelechi, who is better known as Tekno, has disclosed that he is staying away from marijuana intake.

Tekno revealed this in a post on his Instagram story and said he found it a little difficult to sleep the first night after he quit smoking.

The former Triple MG signee said it was difficult for him to sleep at first after quitting the substance, stressing that he has, however, stayed 24 hours without the drug.

“My first 24 hours of not smoking cannabis, marijuana, weed or whatever you decide to call it. It was a little hard to sleep the first night, but this is 24 hours. I am about to go another 24 hours; I am trying to go 30 days not smoking weed.

“At the end of these 30 days, I will decide if I want to keep smoking or if I don’t want to smoke anymore, but I will come back here to keep you guys updated every day,” he stated.

Shakira reveals her heart was broken by footballer Gerrard Pique

Internationally renowned musician, Shakira on Saturday took to her Instagram page to write, sharing a video of a man crushing a heart months after Gerard Pique left her for a younger woman.

In June 2022, Shakira broke up with her longtime partner and FC Barcelona star Gerard Pique amid the infidelity allegations, ending their 11-year union.

Writing about being ‘served breakfast’, the musician wrote, “I never said anything but it hurt. I knew this would happen.”

Watch the video below.
https://www.instagram.com/p/CjdrDzjjTQq/

Mr Macaroni queries politicians, says they are united in corruption

Nigerian actor and content creator, Adebowale Debo Adedayo, who is better known as Mr Macaroni, has said that all Nigerian politicians are united in corruption.

The actor also criticized Nigerians for fighting themselves over politicians.

Macaroni, who, in a post shared on Twitter, called Nigerians’ attention to the huge amount that politicians spent on their feeding and welfare despite the nation’s poor economy, advised Nigerians to vote wisely in unity.

“Fellow Nigerians, Nigeria belongs to you!! All of the milk and honey, the wealth and glory, all belong to us. It is not to be circulated amongst a few people. The few want us to remain divided so they can continue to loot the nation dry! We must realize the power in our unity.
“Nigerian students have been at home for over 8 months now. The education of the youths is in dire jeopardy while our leaders continue to send their own children overseas to get quality education that they have refused to provide for the people back home. How shameless.”
https://twitter.com/mrmacaronii/status/1577735895238705154?s=20&t=qZ_wifJjUT0xXlUvXoQVsA
Basketmouth urges EFCC to apprehend corrupt politicians
Nigerian comedian, Bright Okpocha, popularly known by his stage name Basketmouth, has questioned the Chairman of the Economic and Financial Crimes Commission (EFCC), Abdulrasheed Bawa over the low chance of conviction for politically exposed personnel in the country.

This is following the two recent protests by the youths in Warri area of Delta State and that of Ibadan over unwarranted arrest and extortion by the anti-graft agency without any links to cybercrime.

Responding to the actions, Bawa noted that the exercise will not stop the agency from arresting anyone causing or promoting fraud in the country.

However, Basketmouth on his Instagram story questioned the EFCC boss for not arresting corrupt leaders who are causing economic disaster in Abuja where the agency’s head office is situated.

He said;
“Great! This is awesome news and I support it, but what about the ones that caused economic disaster: They’re walking freely in that same Abuja. Charity begins at home is all I’m saying.”

The comedian further shared screenshots of past news where different government personnel couldn’t account for the money in their care, yet walking freely.

Basketmouth, however, wrote, “I suggest we build a few animal prisons, their own is too much”.

BBNaija’s JMK reveals she has been single for 25 years

Former Big Brother Naija housemate, Jumoke Adedoyin, better known as JMK has revealed that she has never been in a relationship her entire life.

According to the TV star, she has been single for 25 years of her life and anyone who says they dated is a liar as they were only ‘chilling’.

Taking to the social media platform, Twitter, she revealed this;

“25years on earth and I’ve never had a boyfriend. If anybody tells you they dated me, na lie. We were just chilling xx”.

https://twitter.com/Ms_Jmk/status/1578139238776082432?s=20&t=qZ_wifJjUT0xXlUvXoQVsA
Actor Gideon Okeke explains why men should be commended
Nigerian actor, Gideon Okeke on Thursday took to Instagram to commend men for their sanity.
According to the actor, social media has had a negative impact on men as a result of the viral display of nudity on social media.

Gideon emphasised that certain men are still commendable for their discipline despite various distractions.

He further stated that the outside world is getting “crazy”, especially on social media; hence, women should be grateful for their men holding phones and still stay sane.

Equally, there are speculations that the movie actor and his wife, Chidera are having marital issues.
The couple who got married in 2019, have unfollowed each other, deleted photos of themselves on Instagram, and ignored their wedding anniversary which was in September.