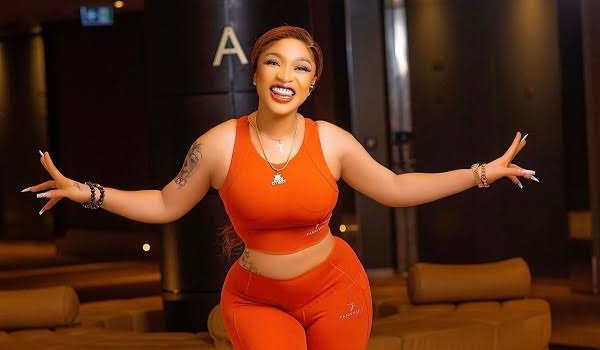 Nigerian actress, Tonto Dikeh has explained that she could still become a pastor in the near future.

The actress made this known during a recent interview session with media personality, Chude Jideonwo. The deputy governorship candidate of the African Democratic Congress (ADC) in Rivers State claimed God ordained her to become a pastor.

“I’m an opportunist with this thing called acting or entertainment. But for God, he has ordained that step already. For me, I was just swimming in a swimming pool,” she said.

“I mean, I was a church girl going to be a pastor. I was supposed to be a pastor, I still might be. Depending on where God is taking me to,” she added.

Listen to her speech below.

Nigerian disc jockey and billionaire heiress, Florence Otedola, who is better known as DJ Cuppy, has revealed the reason her billionaire father, Femi Otedola splashed millions of dollars to rent a luxury yacht for his 60th birthday celebration.

On Thursday, Otedola in a post on his Instagram page shared several photos showing off moments with his family as they boarded the Aristotle Onassis’ Christina O super luxury yacht that will sail for three weeks on the Mediterranean Sea.

“Welcome Aboard Christina! Are you ready for #FO60 …F.Ote💲”

Speaking about her father’s birthday on Instagram, DJ Cuppy shared fun moments with other family members on the luxury yacht.

The renowned disc jockey explained that her father, as a little boy, always dreamt of visiting the iconic 99m super-yacht CHRISTINA O because it was owned by his role model, Aristotle Onassis.

“To celebrate his 60th, not only did he visit the yacht, but he has chartered it for his loved ones so we can live here for the next three weeks. Looking at my father, I can see how happy, accomplished, and still in disbelief he is. This is what love looks like, family first,” she wrote.

Controversial UK-based Nigerian preacher, Tobi Adegboyega has disclosed that the singer, Davido and his lover, Chioma Rowland are both getting stronger following the unfortunate demise of their son, Ifeanyi Adeleke earlier in the week.

He stated that he has spoken to Davido twice since the incident and that he is getting stronger since his son passed on after he drowned in a swimming pool on Monday.

Nigerian recording artiste, Kizz Daniel kicked off his concert in Dubai on Friday night, November 4, with a minute of silence for Late Ifeanyi.

In a viral video, the singer and some of his fans were seen halting their activities to mourn Ifeanyi’s death.

It was reported that Ifeanyi Adeleke died on October 31 after drowning in the pool in his father’s Banana Island mansion.

Cindy Okafor, a former Big Brother Naija contestant has revealed via her social media platform how people can make it in the entertainment industry without nudity.

The reality Tv star disclosed the idea following the trend of excessive displays of nudity for fame.

According to Cindy via her Instagram story, everyone can make it in life without exposing their naked bodies.

She also advised people who desire to go viral and make it big to use their talent or creativity, as nudity is not the only way out.

“Excessive nudity everywhere oh my goodness, you can also go viral or make it with talent and creativity. Excessive open body isn’t the only way out,” She noted.

In April 2022, Yul Edochie unapologetically declared he was practising polygamy after he welcomed a baby with his Nollywood colleague, Judy Austin-Moghalu.

The actor criticized Nigerians on his Facebook page for being bothered about his marriage instead of being concerned about the implications of Nigeria’s debt to China.

Yul specifically criticized those keeping tabs on his marriage while ignoring the urgent problems facing the nation.

“So while many of you are busy monitoring & discussing how many women Yul Edochie married and why he shouldn’t marry them which is not your business, China has concluded plans to take over many African countries including Nigeria.

“And if that happens we simply become slaves again.

“According to reports, China has given large amount of loans to Nigeria and many other African countries and the agreement says, ‘Failing to pay back the loans, China will take over XYZ in your country.

“It’s only a matter of time, God forbid, Nigerians will become slaves to Chinese in our own country.

“These are some of the discussions we should be having in all platforms, day and night, and find ways to charge our leaders to wake up and work out means to repay these loans else we are finished.

“I say make I give una update. Have a beautiful day.”

Regina Daniels brags about not cooking for Ned Nwoko

Nigerian actress, Regina Daniels revealed in a video that also featured her husband, Ned Nwoko that she does not cook for him.

The mother of two was seen admiring herself before the camera while her husband drove them in his expensive vehicle.

Nwoko, a renowned polygamist pointed out that his stomach was protruding and his wife, Regina responded that it was evidence of good living.

He added that he was going to say that she was the one cooking for him but she quickly reminded him that she doesn’t enter the kitchen for any reason.

Daniels stated in the video:

“Like they don’t know I don’t even use to enter the kitchen.”

“If you enter kitchen na to kill yourself”, and they both laughed heartily.