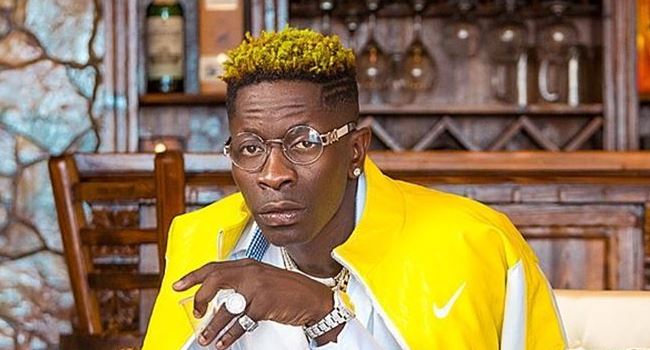 Since the Ghanaian musician stated that he was ‘Fela Kuti’, most social media users have nefariously dragged him.

The musician, while condemning his counterparts from the most populous black nation, said he doesn’t need Nigeria to promote his music.

“I don’t need Nigerian promotion for anything. No Nigerian artiste can say I visited them. How many of your rappers can beat Sarkodie?

Nigerian fans stay on the internet and talk bullsh*t. It’s your turn today, but tomorrow is another man’s turn. If you people didn’t see Fela Kuti for a long time, he is back. This is him. Accept it or forget it.”

Popular Nigerian thespian, Uche Jombo has opined that many people have been enslaved by the messages of their spiritual leaders.

In a post shared on her social media platform, the actress stated that most people are focused on their pastors instead of seeking methodologies on how they can worship God.

The mother of one had this to say:

”Many people are enslaved mentally by pastors when the focus SHOULD be knowing and worshiping God.”

Zahra Buhari-Indimi, the daughter of President Muhammadu Buhari in her Instagram page shared a post that disclosed the issues that often ruin marriages.

The post specifically revealed how women are usually assigned the burden of keeping their homes by being submissive.

It reads: “Asking wives to be submissive to their husbands without asking the husbands to love their wives has ruined lots of marriages.”

Nigerian recording artiste Divine Ikubor better known as Rema confirmed on social media that he has gained admission into the University of Lagos (UNILAG).

The 21-year-old musician stated on his official Twitter page that his mother has insisted that he gets a degree regardless of his fortune and fame.

Rema who is signed to Don Jazzy’s Mavins Record disclosed that he has been admitted into the Creative Art Department. His announcement fascinated netizens who quickly made him the trending topic for several days.

“What if I told y’all I got an admission into Unilag? Lol Mom said I still need to get a degree sigh, oh well see you guys in class!”

Specifically, the model who featured on Rihanna’s Fenty brand in 2018 stated that marriage was not for her; she mentioned in her post that she ran out two weeks after being engaged.

The controversial model also said that she’s disappointed in marriage; adding that she has come to the conclusion that marriage is not for her.

She added that she now has two children and is contented with that.

“I’m sorely disappointed in marriage that I ran out two weeks after engagement. I no do, marriage is not for me. Abeg I don born two and I am so contented with them like this.”

Adeyemi Olaitan, an estranged wife of the Alaafin of Oyo humored her followers when she unveiled a romantic text that she received from an elderly fan on Instagram.

The former partner of the Oyo traditional leader shared screenshots of the text she received from her admirer identified as Abu Tosho Olaq from Kwara State.

In the message, the man wrote: “I love you baby”

Read the conversation below.

Bisi Alimi, an activist of the Lesbian, Gay, Bi-S*xual, Transgender, Queer (LGBTQ) community has advised men who fast and pray for a wife to apply a different methodology to seek for a life partner.

In a post published on his Instagram stories Bisi Alimi admonished men to desist from seeking women as their life partners because there is a possibility that their partner could be a person of the same gender.