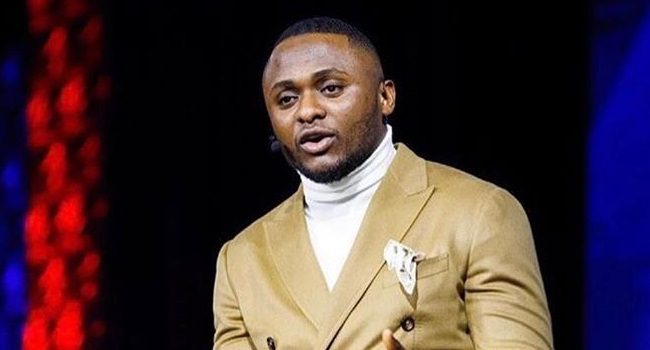 Nigerian music executive, Ubi Franklin admonished young men to desist from making mistakes as he has done.
This is after the father of five children watched on within the week gone by, as his baby mamas dragged one another on various social media platforms.

The drama had started on Wednesday when Iheuwa and Adesuwa Renee, Franklin’s rumored US-based girlfriend, engaged themselves in a war of words on Instagram.

The founder of Made Men Music Group (MMMG) had called for calm in an earlier Twitter post while urging the public to respect his relationship and the parties involved.

His response, however, did not go down well with Iheuwa, sparking a fresh round of controversy involving accusations and counter-accusations between the pair.

In an Instagram post on Thursday, the media personality said his experience should be a lesson to young men considering going into a relationship.

The baby mama conundrum is a prominent theme in the life of celebrities. Stars such as 2 Face Idibia have experienced similar pandemonium in their personal life; as a matter of fact, Afrobeats icons- Davido and Wizkid have also been making up the numbers in recent years.

Former Senator representing Kaduna Central, Shehu Sani took to the microblogging site, Twitter to share his findings of ladies having more uncles than their male counterparts.

I may be wrong, but it appears ladies have more uncles than guys.

3. Peter Okoye may have dashed hopes of Psq reunion

Peter Okoye was a member of the now-defunct group, P Square with his estranged twin brother, Paul Okoye.

The one half of the once popular twin singing sensation may have dashed hopes by fans and friends hoping the duo would one day come together to sing again as a team.

Peter, who is renowned as Mr. P revealed in a recent interview that his decision to walk away from the group has made him wealthier and in creative control of his music career.

“Hundred percent, I am. I don’t have to share three ways. Call it greed or selfishness. It’s your own cup of tea. I share with nobody. Yes, my management and my team.

But I’m doing my own thing. I’m freer.

American rapper, Lil Mosey is wanted by police after failing to turn up in court to face a rape charge.

A warrant has been issued for the arrest of the 19-year-old, real name Lathan Echols, from Seattle, whose hit Blueberry Faygo reached the top 10 in both the US and UK last year.

5. ‘Wonders’ of high priest Odumeje and demise of Ada Jesus

Chukwuemeka Ohanaemere, predominantly known as Odumeje, is a wealthy controversial Nigerian clergyman, and general overseer of The Mountain of Holy Ghost Intervention and Deliverance Ministry, who is noted for his unorthodox methods of healing and exorcisism of supposedly demon-possessed individuals.

Born in Imo State, Odumeje had a feud with a former female associate, the young Comedienne, Ada Jesus who accused him of being a false prophet and a charlatan who stage managed miracles with the help of Nigerian veteran actress, Rita Edochie, who helped by providing him individuals willing to feign ailments for a fee.

Odumeje proceeded to lay curses on her and declared she would be inflicted with an incurable disease. Coincidentally, she became terribly ill with a kidney related ailment which caused her to be completely paralyzed and caused her to lose her ability of speech.

On April 11, 2021, Rita Edochie forgave her and Odumeje also forgave her on April 17, 2021 and donated ₦1 million for her treatment which Ada Jesus’s mother openly rejected.

Despite the relatively huge amount of controversies that continue to trail Odumeje, he maintains a good relationship with the Nigerian entertainment industry as Nigerian entertainers, Flavour, Rita Edochie, Yul Edochie, and Zubby Michael, are often in attendance during his Sunday church services.

6. Ex-BBN housemate, KiddWaya, shows off armed guards for ‘round 2’

KiddWaya did not however let his fans in on what he was into that had gone to ‘round 2’.

The photo failed to resonate properly with Nigerians who called out the Police for giving such security to a celebrity while insecurity heightens in many parts of the country.

However, some hailed the billionaire’s son, explaining the level of kidnapping in the country was enough reason for him to have such security.

This is coming at a time the new acting Inspector General of Police, Usman Alkali Baba ordered the withdrawal of senior police officers from the EFCC.