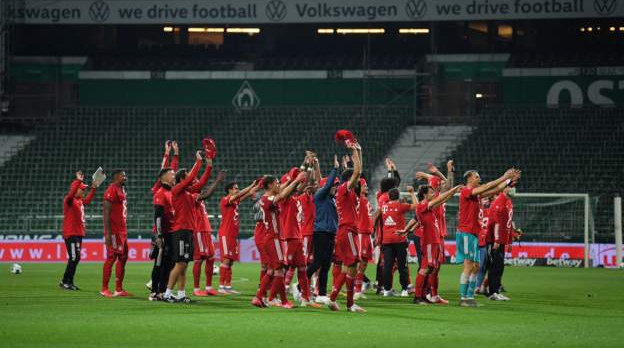 Bayern Munich have emerged champions of the German Bundesliga for the eighth consecutive time after defeating Werder Bremen on Tuesday night.

The champions however finished the match with 10 men after Alphonso Davies was sent off for two yellow-card offences.

Robert Lewandowski scored the only goal of the game to hand Bayern all three points to reach an unassailable 76 points in the topflight.

The Poland striker has scored 31 goals in the league this season, equaling the 31 goals scored by Pierre-Emerick Aubameyang for Dortmund in 2016-17, as the highest by a foreign player in the league.

Bayern have now won the Bundesliga a record total of 29 times.

They celebrated in a near-empty stadium after securing the championship, as the game was played behind closed doors due to the coronavirus pandemic.