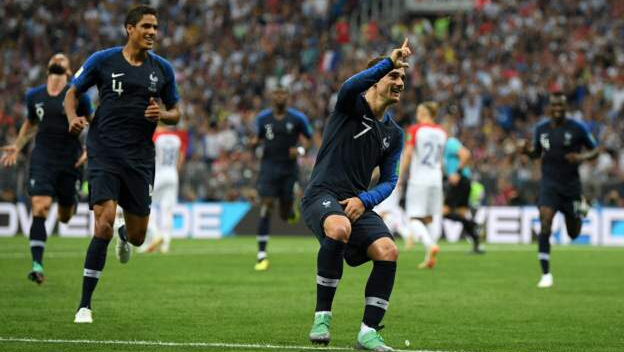 France have emerged winners of the 2018 FIFA World Cup after defeating Croatia in a thrilling final at the Luzhniki Stadium on Sunday.

Didier Deschamps is now the third person to win the World Cup as both player and manager.

Les Blues successfully became a two-time winner of the mundial by seeing off Croatia 4-2 in a highly-contested encounter, having won the 1988 edition which they hosted.

It was Croatia’s first ever final at the World Cup, and they started off with an impressive display, passing the ball around more than their opponents.

But they went behind early when a freekick by Antoine Griezmann laned on Mario Mandzukic’s head and into the net, as the Juventus forwards became the first ever player to score an own goal in a World Cup final.

The Croats rallied back and were level when Ivan Perisic finished off few passes that began with another set piece from Luka Modric.

In the 34th minute, a France corner, swung in, nodded on at the near post did hit Perisic’s hand in the box.

The referee had ignored it, but was forced to consult the Video Assistant Referee (VAR) after which he awarded a penalty against Croatia, and Griezmann stepped up and converted to put his country ahead again.

Goals continued to rain in the second half, as France added two more by 65 minutes from Paul Pogba and teenager Kylian Mbappe, before Mandzukic drew one back when he slotted in after a Hugo Lloris error.

France held on to the lead and emerged World champions for the second time!