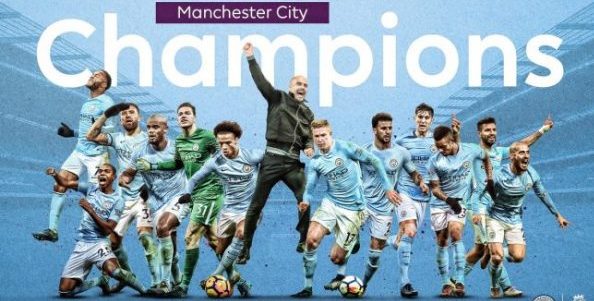 The Red Devils delayed City from becoming champions last weekend when they came from 2-0 down to win 3-2 at the Etihad Stadium.

But City needed to win Tottenham on Saturday and hope United lose against West Brom today to be declared winners – and it was so!

Pep Guardiola’s men defeated Spurs 3-1 at Wembley to stand with 87 points at the top of the Premier League table, 16 points ahead of second-placed Manchester United.

City were hoping to become champions next Sunday if they win Swansea City at the Etihad, but with United’s defeat at home to West Brom, the trophy came early.

With the triumph, City have become a three-time Premier League winners – a feat they are achieving in seven seasons.

There are five matchdays left for the 2017-18 Premier League season to be over, and City have dominated the title race, scoring a total of 93 goals and losing only twice so far.