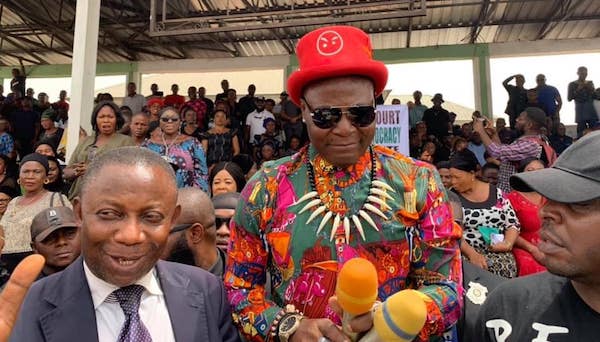 The streets of Owerri in Imo State witnessed an overflow of demonstrators under the aegis of the Imo Concerned Citizens Forum who came out in their numbers to protests against the Supreme Court ruling which sacked Emeka Ihedioha and replaced him with Hope Uzodinma on January 14.

Led by their patron, Charles Oputa, popularly known as Charly Boy, the group on Wednesday stated that the court ruling which sacked Ihedioha as the governor of Imo State was a miscarriage of justice.

The activist said during the protests that his late father, Justice Chukwudife Oputa, who headed the Supreme Court at a point, told him and all Nigerians that the apex court can make mistakes.

Speaking further, the former President of the Performing Musicians Employers Association of Nigeria (PMAN) said that the group was protesting the judgment by the apex court and also urging it to restore Ihedioha’s mandate.

“What we are here to say is very simple. We have come to ask the Supreme Court to reverse its judgment and return justice to Imo State. What was done a few weeks ago by the Supreme Court was a miscarriage of justice.