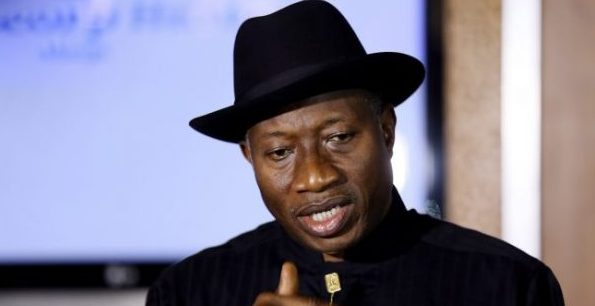 Former President Goodluck Jonathan says he cannot take responsibility for the abduction of Chibok girls during his tenure.

Jonathan President said this during an interview on BBC.

He also said there is apprehension among Nigerians regarding the neutrality of government agencies that will take part in the conduct of the 2019 general elections.

The former president however said he had faith in the Independent National Electoral Commission, the Nigeria Police Force, the Nigerian Army and the Department of State Services to do well.

He said, “We are a bit worried about the neutrality of the relevant agencies of government because with previous elections, I was not in the field. Of course, after every election, people will complain naturally but those are the areas people are getting worried but I believe the elections will come and go and those bodies- INEC, the police, the army and the DSS will be able to do well.”

On the abduction of the over 200 schoolgirls in Chibok by Boko Haram in 2014, Jonathan said denied responsibility.

He said, “I cannot take responsibility for the abduction, I don’t control Boko Haram. They are criminals. But as a President, of course you know it is not the President that goes to the field. You have security and intelligence officers that do the work.

“Let me admit that yes, maybe they did their best but their best was not good enough for us to recover the girls. That I cannot say I am right or I am wrong. That does not mean I am trying to remove myself from any blame.

“I may not be blamed for the action but I could be blamed that my security intelligence system was not strong enough to rescue the girls. If I as a politician could tell the whole world that my political ambition for any office is not worth the blood of a single Nigerian, how would I be happy that girls have been kidnapped? I am not that kind of character.”

The former President also lamented the way the Chibok issue was politicised.

He wondered why the First Lady of the United States would take part in carrying a ‘Bring Back Our Girls’ placard.

Jonathan said, “Immediately the Chibok issue came up, we expected Nigerians to be concerned about how to get these girls out. Within a couple of days, we saw people going to the US with ‘Bring Back Our Girls’ placards. How? Why? And of course, Mrs. Obama received one of those placards.”

The former President reiterated his concern over the supposed interference of President Barack Obama during the build-up to the 2015 general elections.

Jonathan questioned the rationale behind the visit of US Secretary of State, John Kerry, to Nigeria on the eve of the elections, adding that such an interference should not be swept under the carpet.

He said, “The level of interference by the Obama government was very overwhelming. It is not as if I could not have won the election even with that. If by my own thinking and also the way other people looked at it, they go outside the normal diplomatic relationship, then it should be mentioned.

“Sending that person to Nigeria on the eve of elections even after Obama had issued a statement directing Nigerians to vote for the next chapter, that tells you something and we should not sweep these things under the carpet.

“If a foreign country whether African country or America interferes with our own elections, we should mention it.”