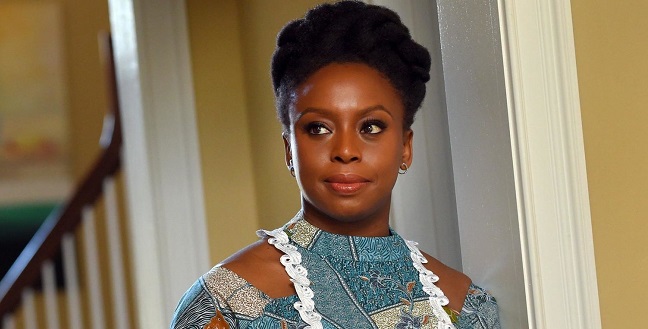 Nigerian novelist and activist Chimamanda Ngozi Adichie is disturbed that domestic chores in the house is still seen as a woman’s job in many countries across the world.

The writer who was described in The Times Literary Supplement as “the most prominent” of a “procession of critically acclaimed young Anglophone authors”, in an interview with Reuters said that women may be making strides in the workplace and public life, but still bear the lion’s share of domestic work.

Chimamanda who was speaking on the sidelines of a conference in the Chilean capital, Santiago said that women are now doubly burdened by doing domestic work at home and also working outside the home and so what can seem like equality really isn’t.

She said; “The #MeToo movement in many parts of the world made it possible for women to start talking about things that women couldn’t talk about, so for me, that’s progress of sorts. Often, it feels as though it’s two steps forward and one step backward. We are talking about it but we haven’t quite found the solutions yet.

“The idea of domestic work, for example, who does it, is it something people should be paid for? In many countries across the world, it’s still thought of as something that women should do. Because of that, women are doing domestic work at home and also working outside the home. Women are now doubly burdened and so what can seem like equality really isn’t. In the future, we have to address that; otherwise, it will take women back even more,” Chimamanda added.

The multiple-award winning novelist also took a swipe at U.S. President Donald Trump, saying his stricter approach to migration from Central and South America represented “cruelty for the sake of cruelty.”

“This administration has criminalized immigration in a way that I think is immoral,” she said. “Many people want to come to the U.S. not because they are criminals or bad people but because they want better for themselves,” she said.

Related Topics:Chimamandadomestic chores
Up Next