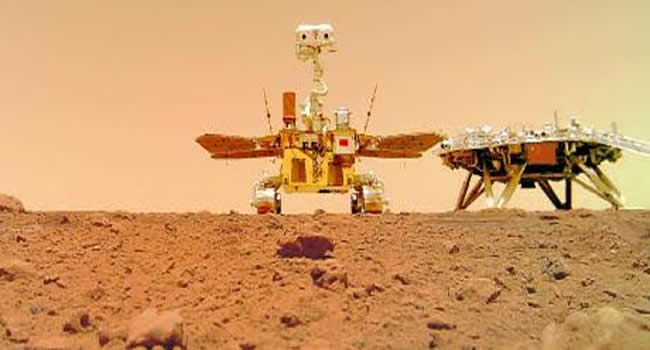 China has released new photos of Mars taken by its home made Zhurong Rover exploring the surface of the “red planet” on Friday.

The Zhurong rover named after the god of fire in Chinese mythology, landed on the Utopia Planitia region of Mars on May 15, making it China’s first Mars mission and only the second country to land a rover on the planet, after the United States.

The rover sent back its first images of Mars in May, several days after landing, showing a deployed ramp and the flat landscape where it arrived.

The new photos included a 360-degree panorama of the landing area, stitched together from a number of images the rover took after landing, before it began driving through the area, according to Chinese state-run news agency Xinhua.

Another image showed the orange Martian surface, with scattered rocks, a circular crater on the far side, and dunes in the distance, while a third image shows the Chinese flag near the landing platform.

“China will publish the related scientific data in a timely manner to let humankind share in the fruits of the country’s space exploration development,” said Zhang Kejian, head of China’s national space agency, in the Xinhua report.