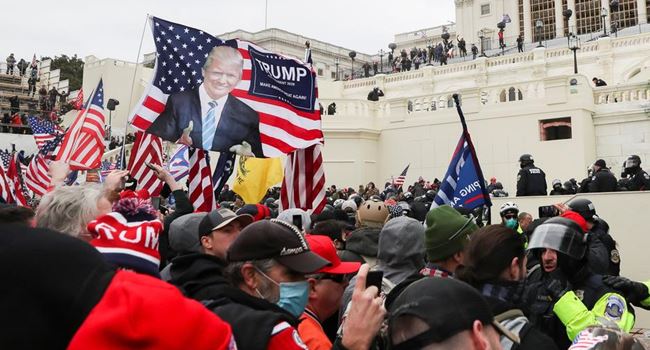 China has taken delight in recent happenings in the United States of America after it ridiculed the storming of US Capitol by angry supporters of Donald Trump who broke down barricades and swarmed the premises, as special sessions were ongoing, thus forcing an emergency recess.

China’s Communist Youth League on Thursday described the unrest as a “beautiful sight” on social media.

In the same vein, the hashtag “Trump supporters storm US Capitol” trended on China’s social media platform, Weibo with up to 230 million views, as users compared the global support for Hong Kong’s protesters with the outpouring of condemnation for the pro-Trump mob.

“At present, all European countries’ leaders have shown double standards and condemned it (Washington rioting),” read one Weibo comment which gained over 5,000 likes.

“I don’t know what kind of double-standard reports will be carried by Hong Kong or Taiwan media this time.”

“What happened in the Hong Kong Legislative Council last year is being repeated in the US Capitol,” wrote another user in a comment with over 4,500 likes.

Meanwhile, several countries including Australia, the UK, and Canada have condemned the action by Trump supporters while also calling for calm and a peaceful transition of power.

UN Secretary General Antonio Guterres was “saddened” by the breach of the US Capitol building, according to his spokesman Stephane Dujarric.

“In such circumstances, it is important that political leaders impress on their followers the need to refrain from violence, as well as to respect democratic processes and the rule of law,” Dujarric said in a statement.

New Zealand’s Foreign Minister Nanaia Mahuta said the events in Washington were a source of regret and that New Zealand looked forward to the peaceful transition of power.

Also, in a video posted to Twitter, French President Emmanuel Macron described the attack on Congress as “not America” and said he had “confidence in the strength of democracy in the United States.”

No sign South Africa COVID-19 variant can resist vaccine –WHO