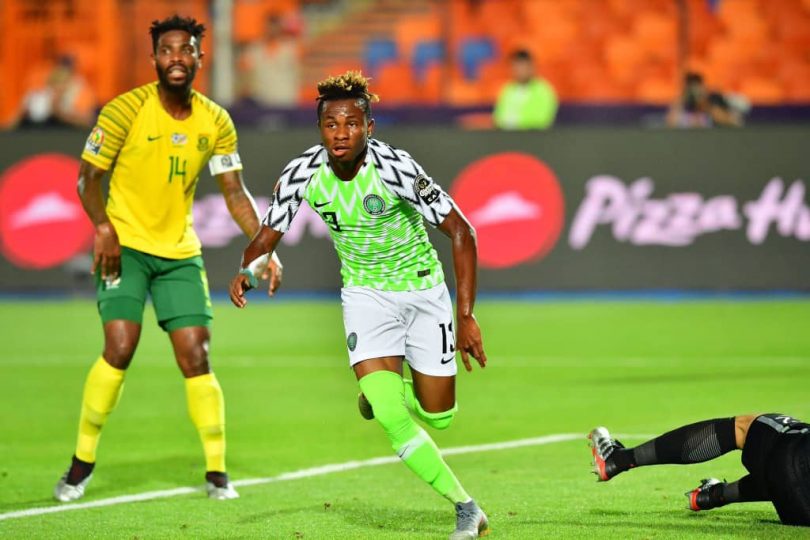 The Super Eagles of Nigeria have secured a spot in the semifinal of the Africa Cup of Nations (AFCON) after beating South Africa 2-1 in Cairo on Wednesday night.

Samuel Chukwueze, who made the starting lineup in place of Moses Simon, justified his selection with a top performance for the team.

The Villarreal forward opened the scoring in the 27th minute when he slotted in from an Alex Iwobi pass inside the box.

Bafana found an equaliser in the 70th minute through a free kick, with Odion Ighalo hitting the ball with his back and Bogani Zungu heading into the net.

The goal was at first cancelled for offside by the linesman, but the centre referee would later consult the Video Assistant referee (VAR) and it was confirmed a goal.

Zungu’s goal was the first in the Africa Cup of Nations given by the VAR, which has just been introduced for the quarter-finals.

With the match heading into extra time, substitute Simon, who came in for Ahmed Musa, took a corner kick and defender Williams Troost-Ekong slided in to net the winner past goalkeeper Ronwen Williams in the 89th minute.

It was an unfortunate defeat for Bafana Bafana, who got to this stage by knocking out hosts Egypt in the last 16 stage of the competition.

Three-time champions Nigeria had beaten defending champions Cameroon in last round, and are now two wins from lifting a fourth continental title.

Up next for the Gernot Rohr men in the last four is a clash with either Cote d’ivoire or Algeria, who both battle in another quarterfinal match on Thursday.

Earlier on Wednesday, Senegal beat Benin 1-0, and they play either Madagascar or Tunisia in the other semi-final also on Sunday.