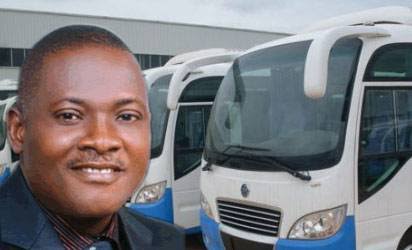 The Chairman of Innoson Group, Innocent Chukwuma, has filed a motion for stay of execution of the arrest warrant issued against him on Friday.

A High Court sitting in Lagos had ordered that Chukwuma be arrested by the Economic and Financial Crimes Commission (EFCC) over his failure to appear before it and face trial.

Chukwuma is being tried for alleged fraud. The EFCC accused him and Charles, his brother, of allegedly obtaining containers of motorcycle spare parts by false pretence between 2009 and July 2011 in Lagos.

During the hearing, J.N. Mbadugha, Chukwuma’s counsel, called the court’s attention to a motion pending at the court of appeal challenging the court’s jurisdiction to entertain the matter.

He had described the charge against his client as an “abuse of process” because “a similar charge on the same subject matter is pending at the federal high court, Lagos division, between the same parties in charge no FHC/l/565c/2015.”

In the motion filed at the court after the Friday ruling, Mbadugha said it is not within the jurisdiction of the court to hear the case.

He also said the EFCC had no power to investigate, initiate and prosecute the appellant — Chukwuma — for “forgery, uttering and stealing.”

“In consequence whereof the court lacks the jurisdiction to entertain the matter, the learned trial judge failed to determine the aforesaid issue,” he said.

“The learned trial judge (also) failed to appreciate that the issue as raised divests the court of the jurisdiction to entertain the matter.”

He, therefore, prayed that the court set aside the decision of Mojisola Dada, the trial judge, issuing a bench warrant against his client.