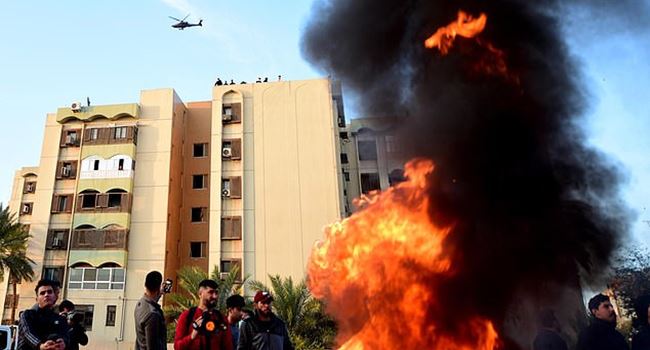 Six rockets have been reportedly fired at the US embassy in Baghdad which unfortunately ‘hit an apartment complex killing civilians’ on the second night of attacks in Green Zone following the extermination of Qassem Soleimani.

The fired rockets are believed to have missed the US embassy by the whiskers, with local reports suggesting that the bombs hit an apartment complex instead and killed an unspecified number of civilians.

Of the six rockets that fell in Baghdad, three struck the city’s heavily secured Green Zone and three in a nearby area, Al Jazeera reported.

Police also told the outlet that at least six people had been wounded in the attacks, which employed Katyusha rockets.

The incident comes after President of the United State of America; Donald Trump threatened to hit 52 Iranian sites “very hard” if Iran attacked Americans or United States assets over the killing of General Qassem Soleimani, the head of its elite Revolutionary Guard Corps (IRGC) Quds Force.

Trump took to Twitter to warn that the US had “targeted 52 Iranian sites” and that some were “at a very high level & important to Iran & the Iranian culture, and those targets, and Iran itself, WILL BE HIT VERY FAST AND VERY HARD.”