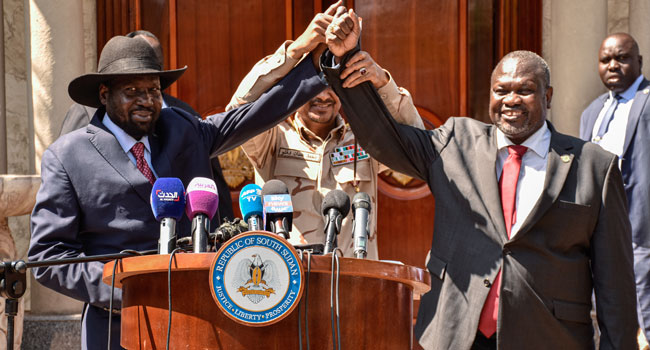 After over six years of disagreement and strife, former South Sudanese rebel leader Riek Machar has been sworn in as first vice-president, sealing a peace deal aimed at ending years of civil war.

Reports say opposition leader Riek Machar was sworn in on Saturday in the capital, Juba, as the first deputy of President Salva Kiir, a day after the previous government was dissolved.

“I do hereby swear that I shall be faithful and bear diligence to the Republic of South Sudan,” Machar said in his oath in front of a room packed with diplomats and regional representatives, including Sudanese leader General Abdel Fattah al-Burhan.

President Salva Kiir witnessed the moment at a ceremony at the State House in the capital, Juba.

The move was applauded by many who see it as an attempt to end years of ruinous conflict that has killed almost 400,000 and forced millions of South Sudanese residents from their homes.

The development comes months after the United States expressed disappointment at the delay in the formation of a government of national unity despite the agreement between the South Sudan president, Salva Kiir, and his rival, Riek Machar.

The failure of South Sudan’s leaders to agree on a power-sharing government was condemned by the Assistant Secretary of State for African Affairs, Tibor Nagy, who questioned whether President Kiir and Machar are the right people to lead the peace process.