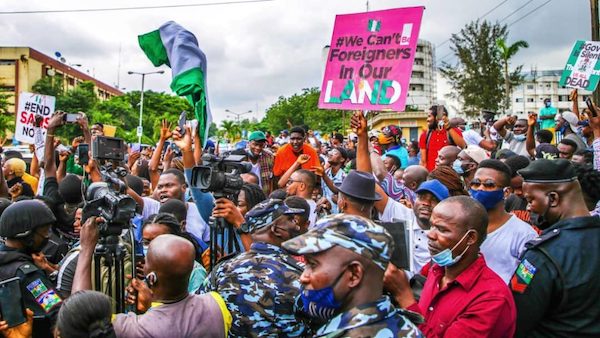 In its efforts to ensure the realisation of the demands of #EndSARS protesters, a coalition of human rights activists has issued a fresh seven-point agenda to the federal government.

The human rights groups described EndSARS protest as an unfinished task that cannot be abandoned.

The fresh seven-point agenda of the coalition are:

1. real, not promissory satisfaction of the ‘5 for 5’ initial demands of EndSARS protesters

2. immediate replacement of the Inspector-General of Police

5. all public officials to be placed on national minimum wage

6. drastic upward funding of education and health sectors and

READ ALSO: ‘Arrest without arraignment of looters shows police yet to get message of #EndSARS protests’

7. immediate deprivatisation of power and oil sectors nationalisation to be restored

The coalition made their demands known rising from a one-day meeting in Lagos on Friday.

The coalition under the aegis of New Nigeria Network (NNN) have the following groups as members Radical Agenda Movement in the Nigeria Bar Association (RAMINBA), Federation of Informal Workers’ Organization of Nigeria, Coalition for Revolution (CORE), Take it Back Movement, Movement for a Socialist Alternative (MSA) and Socialist Workers and Youth League (SWL), among others.

The chairman, RAMINDA, Barrister Adesina Ogunlana, who spoke for the coalition, noted that the brutality meted out to the armless protesters would be pursued until justice was served.

Further noting that NNN comprised groups of progressive forces that actively participated in the #EndSARS movement, Ogunlana said that 17 days protests across the country was “a revolutionary in the sense that it is not a one point static protest but a protest against multi-layer level of challenges in the Nigeria state and it is essentially a demand for the full citizenship status of all Nigerians and the curbing of executive lawlessness, governmental lopsided profligacy and entrenchment impunity. It is all about ‘misgovernance’ of a system and a system of misgovernance.”

Related Topics:coalitionENDSARS PROTEST
Up Next

IGP charges police officers to protect themselves from attacks