Home » International » Cold war between Russia & US over, Putin says 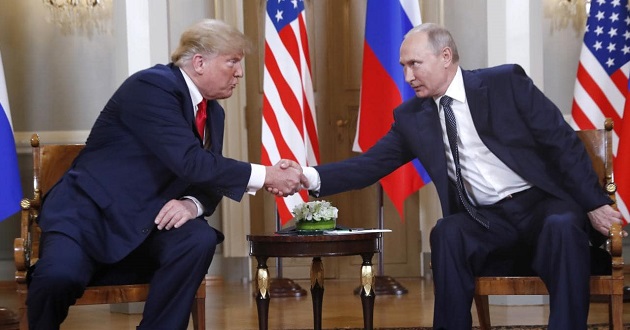 The closed door meeting held in the Finnish capital of Helsinki between US President Donald Trump and his Russian counterpart Vladimir Putin turned out successful after all with the two leaders praising ‘very fruitful’ round of closed-door talks.

After the meeting, Russian leader Putin declared that the cold war with the US was over as both countries have committed to improving relations.

“There was no longer any reason for tensions between the superpowers,” Putin said after the meeting.

“There are no objective reasons for difficulties [between Russia and the US]. The Cold War is a thing of the past, the situation in the world has drastically changed,” Putin added.

Earlier, Trump blamed his own country’s past “foolishness and stupidity” for the two powers’ hostile relations.

Trump praised their “direct, open and deeply productive dialogue” and emphasised the need for continued diplomacy over confrontation.

“A productive dialogue is not only good for the United States and good for Russia, but it is good for the world,” he said.

“Our relationship has never been worse than it is now, however that changed as of about four hours ago… To refuse to engage would not accomplish anything.”

However, the meeting between Trump and Putin is been overshadowed back home after Moscow’s alleged interference in the 2016 US presidential vote.

Three days ago, the ongoing probe of special counsel Robert Mueller into Moscow’s alleged interference in the 2016 US presidential vote yielding more results with the indictment of no less than 12 Russians.

Reports say 12 Russian military intelligence officers have been indicted for alleged interference in the 2016 US presidential elections, won by Trump.

The accused were part of “active cyber operations to interfere in the 2016 presidential elections”, Deputy Attorney General Rod Rosenstein told a press conference on Friday.

The indictment revealed that the 12 individuals hacked into computer systems of 2016 Democratic presidential candidate Hillary Clinton and the Democratic Party, stole information and then made the obtained documents public while working for the Russian GRU military intelligence service.