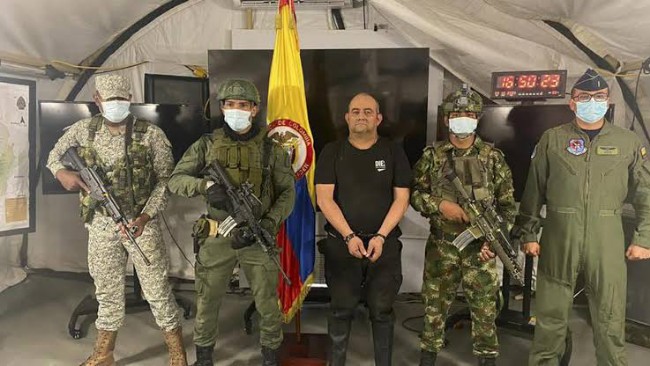 Colombia’s most notorious and dangerous drug kingpin, Dairo Antonio Usuga David, was on Wednesday, extradited to the United States where he will face drug trafficking and other sundry charges.

Usuga David who is the alleged head of the Gulf Clan, a deadly and feared drug cartel, had been Colombia’s most-wanted drug lord before his capture in October 2021.

He was also on the most wanted list of many anti-drug agencies around the world and is currently facing indictments in three federal courts in the US.

Colombian President Iván Duque who personally supervised the extradition of Usuga David, said he is “comparable only to Pablo Escobar”, referring to the late former head of the Medellin drug cartel.

“I want to reveal that Dairo Antonio Usuga, alias ‘Otoniel’ has been extradited,” Duque said on Twitter, calling him “the most dangerous drug trafficker in the world.”

Better known by his alias Otoniel, the former rural warlord had been on the run for more than a decade by corrupting state officials and aligning himself with combatants on the left and right.

Usuga David was transferred on Wednesday in handcuffs and wearing a helmet and bulletproof vest from a prison in Bogotá to a heavily guarded military transport air field.

Usuga David was first indicted in 2009, in the Manhattan federal court, on narcotics charges and for allegedly providing assistance to a far-right paramilitary group designated a terrorist organisation by the US.

Later indictments in Brooklyn and Miami federal courts accused him of importing into the US at least 73 metric tonnes of cocaine between 2003 and 2014 through countries including Venezuela, Guatemala, Mexico, Panama and Honduras.

The 50-year-old, according to Colombian authorities, is responsible for the deaths of hundreds of members of Colombia’s security forces, was declared wanted in the US for crimes including drug trafficking, conspiracy and illegally possessing weapons.