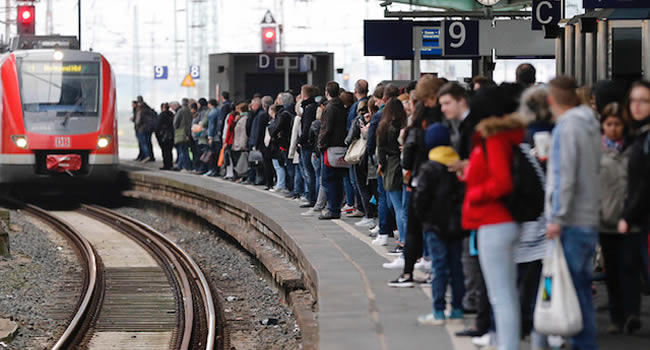 A two-day strike by German train drivers plunged travel in one of Europe’s biggest economy into chaos on Wednesday as passengers scrambled to find alternatives after the industrial action was declared only a day earlier.

Reuters reported that publicly owned German rail company Deutsche Bahn was forced to cancel 75 per cent of long-distance connections in the wake of the strike in a dispute over pay, including a pandemic bonus, and predicted further cancellations and delays to regional links.

“The first effects of the strike are being felt,” said German Train Drivers’ Union (GDL) head, Claus Weselsky with his members walking off the job for the first time in six years.

Weselsky called on the company to make a new offer to help end the dispute with the industrial action coming in the middle of the nation’s annual summer vacation period. School holidays are currently being held in 11 of the nation’s 16 states.

While German carrier Lufthansa deployed larger aircraft to cope with the passenger rush, long-distance bus companies reported a surge in demand with the budget Flixbus group reporting a 70-per-cent jump in bookings compared with the previous week.

READ ALSO: D’Tigers walk a tightrope after losing 92-99 to Germany at Tokyo Olympics

However, Seiler indicated the company’s readiness to return to the negotiating table with the threat of the strike having been building up over months.

“Now it’s up to each other to decide together how we get out of this difficult crisis,” Seiler said.

“We also want our employees to be paid reasonably,” he said, adding that the rail company’s offer is reasonable.

As the industrial action got under way, Deutsche Bahn issued a replacement timetable in a bid to cope with the passenger fallout from the strike.

Three out of four long-distance connections have already been cancelled with reports of rail personnel manning empty stations across the nation.