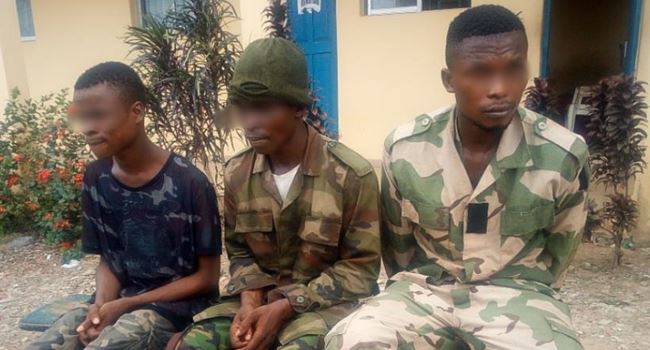 Suspected kidnappers paraded by the police in Abuja on Wednesday revealed that they bought army uniforms for N15,000 to aid their operation.

The suspected kidnap gang members who were arrested in connection with the abduction of three Ahmadu Bello University, Zaria, students, narrated that the uniform was purchased from traders of fairly-used cloths otherwise known as Okrika.

The suspects also confessed that they were responsible for the abduction of a House of Representatives member from Sokoto State.

They also revealed that they collected N5.5 million for the release of the students who were abducted while travelling to Abuja from Kaduna.

Meanwhile, kidnappers of some Turkish  nationals in Kwara State were also paraded.

A gang member, Kabiru Abdullahi stated, “The others lied to me that they were paid N6m, whereas they received a  N10m ransom. I was given only N450,000   from the operation, but the money was recovered by the police after they arrested us.”

Force spokesman, DCP Frank Mba, said eight of the suspects were responsible for the kidnap of a Kaduna lawmaker, Suleiman Dabo, adding that the gang confessed to have received N10m in  ransom before releasing their victim.

Mba also added that the suspects would face the wrath of law in court after investgations.

Tinubu reacts to tribunal judgment on Atiku Vs Buhari