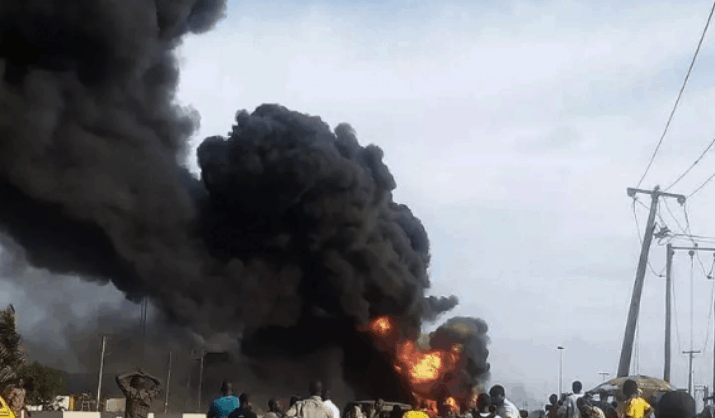 Residents of Ogunlana Street in Ketu-Ikosi Road, Lagos State were thrown into confusion in the early hours of Tuesday morning when a gas station exploded, causing a fire that razed down two shops on the street.

This comes barely 48 hours after a fire outbreak razed a storey building at the Alapeju section of the Ladipo Auto Spares Market, in the Mushin area of the state.

According to eyewitnesses, the fire started few minutes past midnight after power supply was restored.

A resident of the street, Emmanuel Aka, said he heard a loud sound of an explosion and ran out of his house with his newborn baby wrapped around him.

“My wife was still asleep as it was well past midnight. I woke her up and we ran out with just the wrapper we used to cover ourselves as we slept,” he said.

A man who claimed he lived next to the affected building and simply gave his name as Chief, said he saw a girl jump into his compound as he was on his balcony receiving fresh air.

He said, “I quickly became alert. I thought it was a thief. I ran after her and she shouted, ‘Fire! Fire!’. I opened my gate and that was when I heard a loud sound like that of an explosion. I didn’t know which way to run as my car was packed inside and my family was also inside. It was a terrible dilemma.

“Most people were awake following the explosion. I later managed to drive my car away from the scene. If the fire had gotten serious, it would have affected us in this building.”

Meanwhile, some residents of the area said they called the fire stations in Alausa, Ikeja, and even Ikorodu, but they either did not answer phone calls or quickly hung up the phone calls.

However, operatives of the Lagos State Fire Service, who arrived at the scene of the incident about an hour later put the fire under control.

As of the time of filing this report, no casualties were recorded.