Congress calls out Twitter boss for tweeting during hearing. 2 other things and a trivia | Ripples Nigeria 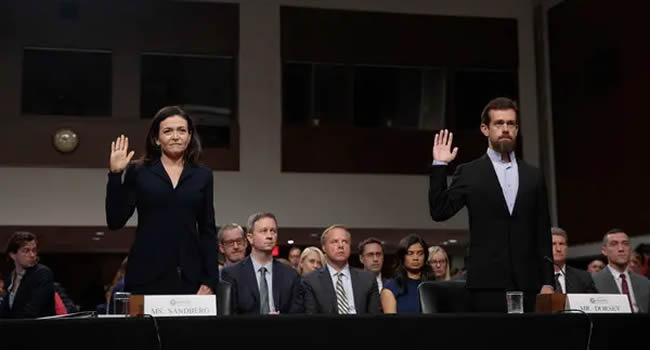 This line-up of stories will help you discover the latest happenings around the tech world today.

1. Congress calls out Twitter boss for tweeting during hearing

Tech leader and Twitter CEO, Jack Dorsey, has been called out by Rep. Kathleen Rice (D-NY) for tweeting during a congressional hearing on disinformation and extremism.

According to media reports, the format of the session had forced the CEO to answer, what is considered as, complicated questions with simple “yes” or “no” answers.

Reporting the incident to the public, Dorsey tweeted out a Twitter poll with just one question: “?” that had only two answers to choose from: either a “Yes” or “No.”

Probing the CEO, Rice questioned his intention for making the tweet.
He asked: “Mr. Dorsey, what is winning — yes or no — on your Twitter account…poll?

Reacting to the probe, Dorsey responded “Yes” in the monotone format, to escape further probe.

Tech Trivia: Which of the following is celebrated as a Nigerian car designer?
A. Jelani Aliyu
B. Aderonke Ogunleti
C. Chike Ofili
D. Musa Tijani
Answer: See end of post.

Online marketplace for home service, Kandua, has created over US$12 million in work opportunities for independent service providers and SMEs in the last 52 weeks.

Seven year old Kandua was founded by Arjun Khoosal and Sayo Folawiyo to help anyone who needs work done in their home – from small fixes to major renovations – to find a vetted, background-checked professionally.

Industry review revealed that the startup aside helping artisans, also helps independent contractors and small businesses to make a name for themselves and to grow their businesses by helping them find new customers.

Today, Kandua offers its registered users access to training opportunities, and through providing them with a suite of easy-to-use tech tools such as a website, a quoting and invoicing app, and digital payments.

Unlike traditional directories, Kandua uses algorithmic matching technology and vets, reviews and background-checks professionals before connecting them with anyone who needs their services.

South African bank, FNB has announced acquiring Selpal, a local fintech company that operates specifically in townships and rural sectors of the economy.

The acquisition, which reaffirms FNB’s commitment to financial inclusion in the country, is considered as an extension of their support towards community-based businesses.

He said: “Community-based businesses have an important role to play in driving economic activity and creating employment opportunities in townships and rural areas in South Africa.

“As the banking sector, we can help facilitate this by accelerating financial inclusion through tailored financial services to elevate and develop these businesses.

“Given the nature and environment in which the businesses operate, this market has traditionally been classified as ‘informal’ because it predominantly operates in cash – which in turn undermined the sophistication, scale, and potential of such community-based businesses.”

Jelani Aliyu is a Nigerian automotive designer who worked for the American car company General Motors.

He was a senior creative designer at GM, until his appointment as the Director general of the Nigerian Automotive Design and Development Council in 2017 by Nigerian president Muhammadu Buhari.