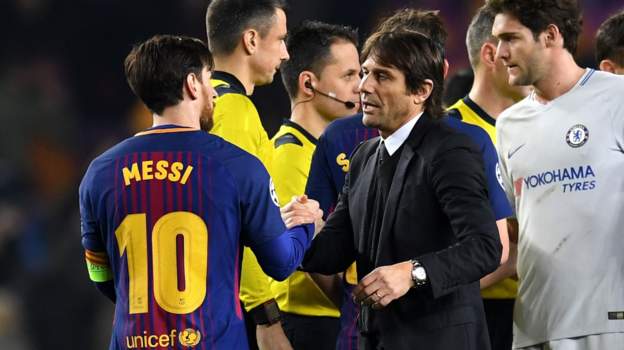 Chelsea boss, Antonio Conte has heaped praise on Barcelona superstar, Lionel Messi after the Argentine spearheaded a 3-0 thrashing of Chelsea in the Champions League on Wednesday night.

With just 128 seconds into the game, Messi opened the scoring for the home side, as he fired a shot through the legs of Thibaut Courtois from a tight angle.

He then set up Ousmane Dembele 17 minutes later to hammer home the second, before putting the game out of reach of their visitors when he scored his 100th Champions League goal after a mistake by Cesar Azpilicueta on 63 minutes.

Barca thus won the round of 16 tie 4-1 on aggregate, having held Chelsea to a 1-1 draw at Stamford Bridge a fortnight ago.

Speaking after the game, Conte admitted that Messi made the difference in both the first and the second leg of the tie.

Read also: Moses out of Champions League with Chelsea as Messi steers Barca into Quarters

“Tonight and in the two legs, Lionel Messi made the difference,” the Italian told BT Sport.

“We are talking about the best player in the world. Over the two legs we were a bit unlucky. We hit the post four times. In our best moment today they scored.

Conte however was pleased with his players’ sense of commitment in the game despite their loss.

And with the FA Cup still within their reach, the boss says the team will begin preparation for their quarterfinal clash against Leicester City at the King Power Stadium on Sunday.

“We have no regrets. I must be pleased for the commitment. They gave everything tonight. We didn’t deserve to lose 3-0.

“We have to go and move on and to prepare for the game against Leicester on Sunday,” he added.