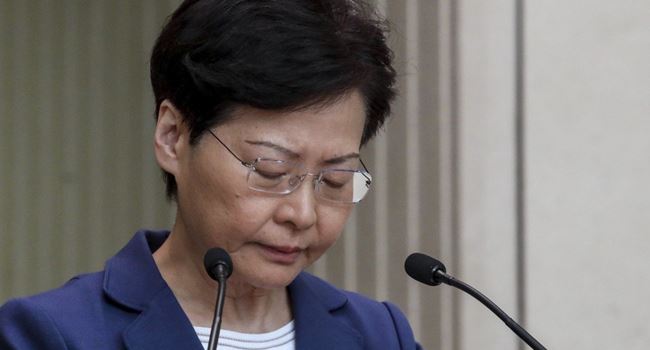 The Chief Executive of Hong Kong, Carrie Lam has announced that the outbreak of MERS & SARS-like disease known as Coronavirus is now an “emergency” for her semi-autonomous terrain.

In a bid to check a possible spread in Hong Kong, Lam earlier on Saturday, ordered that all visitors coming from mainland China will be required to complete public health declarations.

“Of course, for this to work, it’s going to have to rely on the honesty of people filling in those forms to really state where they’ve been in China, especially if they’ve been in Wuhan.”

Meanwhile, the death toll arising for the virus has increased from 26 to 41 in China with health officials confirming that at least 1,287 have been infected in the mainland as the government has ordered nationwide measures to detect the virus at transport terminals.

Reports say local authorities have placed restrictions on 10 cities Hubei province – the centre of the outbreak with more than 40 million people who are affected living in urban areas.

The outbreak has also witnessed the suspension public transport amid fears that the transmission rate will accelerate as hundreds of millions of Chinese travel for the Lunar New Year.

Related Topics:coronavirusHong Kong
Up Next