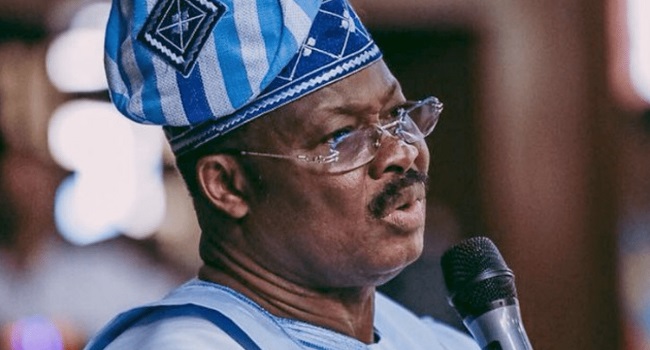 Justice Mohammed Liman of the Federal High Court, Lagos, on Thursday restrained the All Progressives Congress (APC) from going ahead with the March 17 National Executive Council (NEC) meeting without a former Oyo State Governor, Abiola Ajimobi; Waziri Bulama and Paul Chukwuma in attendance.

The judge also directed the APC and its officials not to disturb, prevent or obstruct the trio from carrying out their duties as acting National Secretary, acting National Deputy Chairman (South) and acting National Auditor of the party respectively.

The order followed an ex parte application filed by the Lagos State Chairman of the APC, Tunde Balogun and argued by his lawyer, Gani Bello.

He told the court that after the three offices became vacant and were zoned to different geopolitical zones, Bulama was nominated by the North-East; Ajimobi, by the South-West; and Chukwuma, by the South-East.

Balogun said Bulama’s nomination was ratified at the meeting of the APC National Working Committee (NWC) held on January 14 while those of Ajimobi and Chukwuma were endorsed on March 4.

He said: “By virtue of the ratification stated above, the nominees have become members of the National Executive Council and are entitled by the constitution of the defendant (APC) to work and operate in acting capacities in their respective offices pending their swearing-in at the National Convention of the party.

“Despite the foregoing, the defendant (APC), acting through its officials and officers, particularly, the Deputy National Secretary, has not allowed the nominees to perform their duties as members of the National Executive Council.”