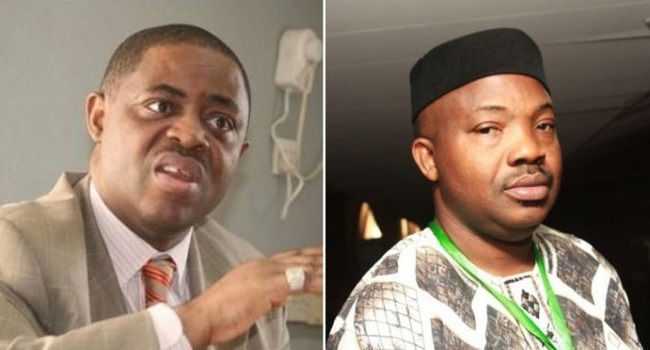 Economic and Financial Crimes Commission (EFCC) and the Department of State Services (DSS), have been ordered not to arrest Femi Fani-Kayode and Yinka Odumakin for spreading fake news.

According to the court, the duo can be arrested only when appropriate due process of the law is followed.

This was the ruling of the Abuja Federal High Court, presided over Justice John Tsoho on Tuesday.

The court gave the ruling in its judgment on a fundamental rights suit filed by Fani-Kayode and Odumakin.

Justice Tsoho also held that the EFCC’s public declaration to arrest Fani-Kayode and Odumakin on the basis of spreading false rumours was an infringement on their rights and a breach of their fundamental rights enshrined in Section 34(a) 35(1) (4) and (5) of the 1999 Constitution.

The judge further made an order enforcing Fani-Kayode and Odumakin’s fundamental rights and ordered the EFCC, the DSS and the Nigeria Police to stop issuing threats of unlawful arrest.

The court, however, declined to grant the prayer compelling the EFCC, DSS and Police from tendering an unreserved apology to the duo for infringing on their rights.

The prayer of the applicants asking the security agencies to pay the sum of N20 million as damages for infringing on their rights was also declined by the judge.

Fani-Kayode, a former Minister of Aviation and Odumakin, the Spokesperson of Afenifere had dragged the EFCC to court for alleged plan to arrest them.

They also joined the DSS and the Police in the suit they filed at the court through their counsel, Mr Chukwuma Machukwu-Ume (SAN).

The EFCC is alleged to have planned to arrest the duo for failing to honour its invitation to explain why they allegedly spread fake news.

Fani-Kayode and Odumakin had claimed on their social media handles that EFCC operatives surrounded the home of suspended Chief Justice of Nigeria, Walter Onnoghen.

The claim however turned out not to be true.

Related Topics:Court on Fani-Kayode - Odumakin fake news caseCourt to EFCC on arrest of Fani-Kayode over fake newsFemi Fani-KayodeYinka Odumakin
Up Next