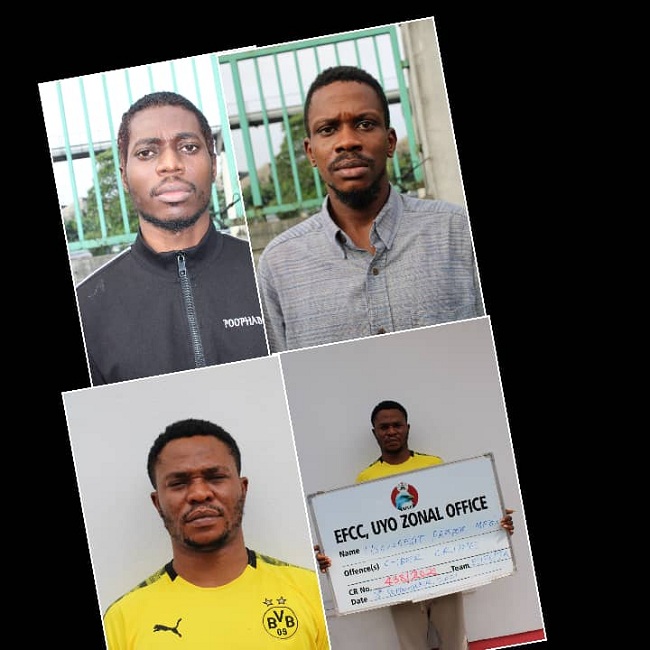 According to a statement made available to Ripples Nigeria by head of media and publicity of the EFCC, the convicts were arrested on August 23, 2021 within Osong Ama area of Uyo, Akwa Ibom State, for their involvement in internet fraud. While Prosper Idongesit Mfon falsely presented himself as Steve Wagner and succeeded in defrauding his victims to the tune of $4000. Edidiong Udoyen posed as Janet Franklin, a female American who teaches Crypto Currency online with intent to defraud.

Warri Poweide defrauded his victim of the sum of $6000.

The trio, who were arraigned on Thursday September 9, 2021, pleaded guilty to separate one count charge bordering on cybercrimes. In view of their pleas, the prosecuting counsel Adebayo Soares prayed the court to convict and sentence the defendants accordingly.

But the defence counsel Udeme Tom pleaded for leniency for the defendants by the Court.

Justice Pam convicted and sentenced all the defendants to three months imprisonment with option of N50, 000 each.

Prosper Idongesit was ordered to forfeit the following items to the Federal Government: iPhone 11, iPhone 12, Infinix phone, one HP laptop and a Flash Drive. He is also to restitute the sum of Four Thousand United States Dollars ($4000) to his victim.