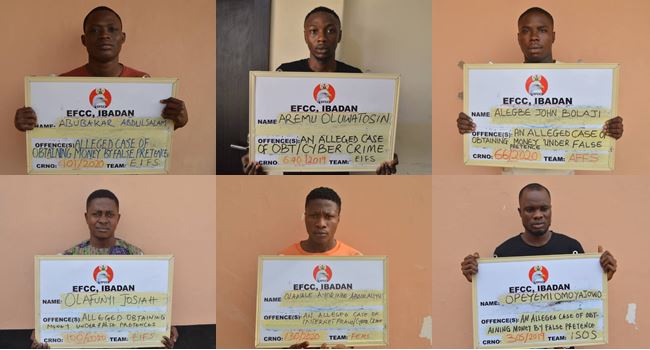 Six internet fraudsters, popularly referred to as Yahoo boys, have been sent to jail by a Federal High Court in Ibadan, Oyo State capital.

Their conviction was secured by the Ibadan Zonal Office of the Economic and Financial Crimes Commission (EFCC), on Monday, June 29.

Abdulaliyu was sentenced to three months imprisonment; Olafuyi got four months; Abubakar and Omoyajowo got six months each, while Alegbe bagged seven months.

The sixth convict, Aremu Oluwatosin Akindele, was tried by Justice Mohammed Abubakar of the Federal High Court, Abeokuta and sentenced to 11 months imprisonment, which takes effect from September 1, 2019 when he was arrested.

Aside the prison terms, the convicts were ordered to restitute their respective victims, through the Federal Government the sums of money they defrauded them, as well as forfeit to the government, all items recovered from them.