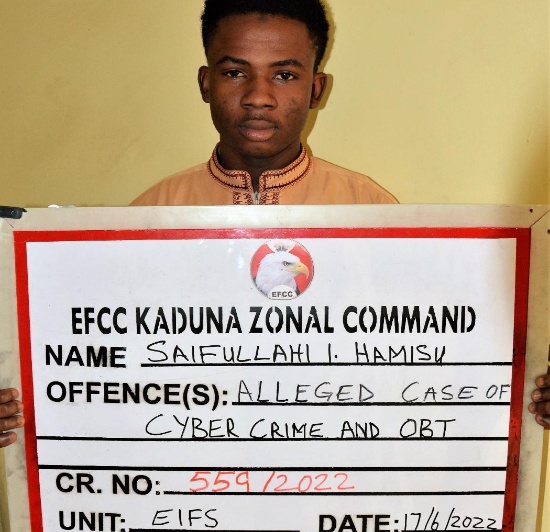 They were all jailed on Thursday, June 23, 2022 after pleading guilty to one-count separate charge bordering on impersonation preferred against them by the Kaduna Zonal Command of the Economic and Financial Crimes Commission (EFCC).

The one -count charge against Saifullahi read: “That you, Saifullahi Ibrahim sometime between April and June, 2022 in Kaduna within the jurisdiction of this Honourable Court falsely presented yourself as Daniel Gomez (United States of America marine) to one Maria (an American citizen), and you thereby committed an offence of Impersonation contrary to and punishable under Section 142(1) of the Kaduna State Penal Code Law, 2017”.

All the five defendants pleaded guilty to their respective one count charges when separately read to them.

Upon their pleas of guilty, prosecution counsels: Nasiru Salele and E. K. Garba and defence counsels: Abdulhakeem Audu, Richard Adedoyin and E.C Ebubedike prayed the court to convict and sentence the defendants based on their various terms of plea bargain accordingly.

Justice Aliyu, thereafter sentenced and convicted Saifullahi Al’Ameen Ibrahim to three months imprisonment each and both are to forfeit the Iphone 13 Pro max and Iphone 13 phones, used in committing the crimes to the Federal Government of Nigeria.

Justice Aliyu also sentenced and convicted Haruna to three months imprisonment and he is to forfeit the Iphone XR used in committing the offence to the Federal Government of Nigeria.

While Ebuka was ordered to forfeit the Iphone X Max used in committing the offence to the Federal Government of Nigeria, Adeyemi is to forfeit about 50 items which were proceeds of crime. These include: one Iphone 13 Pro max, a box containing two Richard Mille and Hublot wrist watches, 16 pairs of designer shoes, Royal Split Air Conditioner, a transfer of land agreement measuring 100 by 100ft, six sets of bedroom furniture, two sets of living room furniture, one Iphone XS Max, 1 Kemage generator, one Royal generator amongst other things.

All the convicts started their journey to the Correctional Centres when they were arrested by operatives of the Kaduna Zonal Command of the EFCC, for impersonating foreigners and using their identities to defraud their victims.