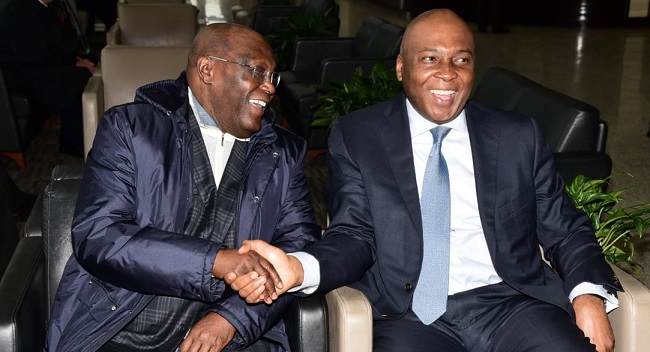 Former Vice President Atiku Abubakar and Former President of the Nigerian Senate, Bukola Saraki have been ordered by a Federal High Court in Lagos to pay a woman, Mrs. Amuda Adeleke, the sum of N5m over unauthorised use of her photograph on their 2019 presidential campaign billboard.

Atiku was the Presidential candidate of the Peoples Democratic Party (PDP) while Saraki was the Director General of the PDP presidential campaign.

Justice Ayokunle Faji, while making the monetary award in a judgment on Monday, said the N5m would be jointly and severally paid by Atiku, Saraki, the PDP and Peter Obi, who was Atiku’s running mate during the election.

Adeleke, had in her suit, marked FHC/L/CS/19, told the court that the defendants used her photograph on their campaign billboard without her consent.

According to her, the unauthorised use of her photograph for the PDP presidential campaign caused her embarrassment.

“All my friends who saw the campaign billboard said it portrayed me as a woman stricken with poverty who had lost all hope and was prepared to commit suicide,” she said.

She prayed the court to award N45m against the defendants for infringing on her fundamental right to privacy as enshrined in the 1999 Constitution.

But after entering judgment in her favour, Justice Faji awarded N5m against the defendants.

Adeleke had explained that in December 2018, during the build-up to the 2019 general elections, agents of the Atiku Abubakar Campaign Organisation led by Saraki, came to Oyin Jolayemi Street, Victoria Island, Lagos to campaign for Atiku and his running mate, Obi.

She added that Saraki and his team engaged people on the street, including herself.

She further stated that she saw members of the campaign train taking photographs during the engagement with the crowd and she thought it was merely to preserve the memory of the event.

Adeleke said she was however shocked when she began to receive phone calls from those who knew her, calling her attention to her photograph on the PDP campaign billboards in Lagos, Abuja and elsewhere.